This was a really excellent challenge for March...so excellent that I ended up making it twice! The challenge was to make Dorie Greenspan's Perfect Party Cake, and we had lots of freedom in terms of fillings and flavors. The first cake I made was for my housemate's birthday. I followed the basic cake recipe, using Meyer lemons from our backyard. The cake layers didn't rise a whole bunch (it seems many folks had this problem), and we were expecting lots of folks at the birthday party, so I made another set of cake layers, eventually ending up with a super-tall cake! I filled it with lemon curd and ginger-infused whipped cream, and frosted the cake with more of the ginger whipped cream. I then covered the cake in unsweetened coconut curls that I toasted in the oven and then tossed in sugar. It fit in perfectly with the tropical theme of the party and was enjoyed by all! 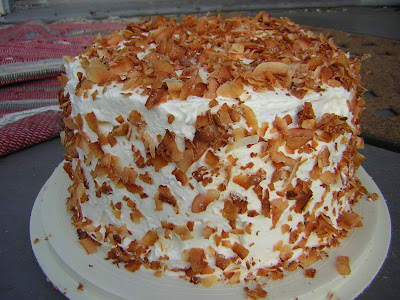 Unfortunately we didn't manage to get a shot of the inside because it got gobbled up much too fast!

Then, at home for spring break, my mom and I decided to bake the cake again for my uncle's birthday dinner. This time, we couldn't find any lemon extract at the store, so we substituted orange extract and orange rind in the cake for a lovely orange-scented cake. These layers rose much better, perhaps because my mom had on hand the type of cake flour Dorie recommends (Swan's Down, as opposed to the Soft-as-Silk I had used in my first try). We split the layers and filled the cake with raspberry-rhubarb preserves and vanilla whipped cream. We frosted the cake with the remaining whipped cream and then sprinkled the cake with fresh coconut, ground up in the food processor. 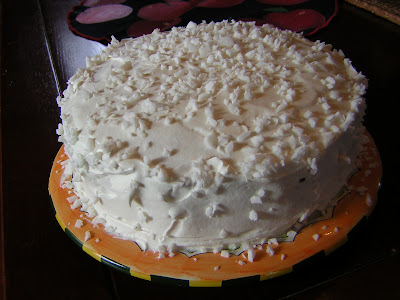 Getting Ready
Centre a rack in the oven and preheat the oven to 350 degrees F. Butter two 9 x 2 inch round cake pans and line the bottom of each pan with a round of buttered parchment or wax paper. Put the pans on a baking sheet.

To Make the Cake
Sift together the flour, baking powder and salt.
Whisk together the milk and egg whites in a medium bowl.
Put the sugar and lemon zest in a mixer bowl or another large bowl and rub them together with your fingers until the sugar is moist and fragrant.
Add the butter and working with the paddle or whisk attachment, or with a hand mixer, beat at medium speed for a full 3 minutes, until the butter and sugar are very light.
Beat in the extract, then add one third of the flour mixture, still beating on medium speed.
Beat in half of the milk-egg mixture, then beat in half of the remaining dry ingredients until incorporated.
Add the rest of the milk and eggs beating until the batter is homogeneous, then add the last of the dry ingredients.
Finally, give the batter a good 2- minute beating to ensure that it is thoroughly mixed and well aerated.
Divide the batter between the two pans and smooth the tops with a rubber spatula.
Bake for 30-35 minutes, or until the cakes are well risen and springy to the touch – a thin knife inserted into the centers should come out clean
Transfer the cakes to cooling racks and cool for about 5 minutes, then run a knife around the sides of the cakes, unfold them and peel off the paper liners.
Invert and cool to room temperature, right side up (the cooled cake layers can be wrapped airtight and stored at room temperature overnight or frozen for up to two months).

To Make the Buttercream
Put the sugar and egg whites in a mixer bowl or another large heatproof bowl, fit the bowl over a plan of simmering water and whisk constantly, keeping the mixture over the heat, until it feels hot to the touch, about 3 minutes.
The sugar should be dissolved, and the mixture will look like shiny marshmallow cream.
Remove the bowl from the heat.
Working with the whisk attachment or with a hand mixer, beat the meringue on medium speed until it is cool, about 5 minutes.
Switch to the paddle attachment if you have one, and add the butter a stick at a time, beating until smooth.
Once all the butter is in, beat in the buttercream on medium-high speed until it is thick and very smooth, 6-10 minutes.
During this time the buttercream may curdle or separate – just keep beating and it will come together again.
On medium speed, gradually beat in the lemon juice, waiting until each addition is absorbed before adding more, and then the vanilla.
You should have a shiny smooth, velvety, pristine white buttercream. Press a piece of plastic against the surface of the buttercream and set aside briefly.

To Assemble the Cake
Using a sharp serrated knife and a gentle sawing motion, slice each layer horizontally in half.
Put one layer cut side up on a cardboard cake round or a cake plate protected by strips of wax or parchment paper.
Spread it with one third of the preserves.
Cover the jam evenly with about one quarter of the buttercream.
Top with another layer, spread with preserves and buttercream and then do the same with a third layer (you’ll have used all the jam and have buttercream leftover).
Place the last layer cut side down on top of the cake and use the remaining buttercream to frost the sides and top.
Press the coconut into the frosting, patting it gently all over the sides and top.

Serving
The cake is ready to serve as soon as it is assembled, but I think it’s best to let it sit and set for a couple of hours in a cool room – not the refrigerator. Whether you wait or slice and enjoy it immediately, the cake should be served at room temperature; it loses all its subtlety when it’s cold. Depending on your audience you can serve the cake with just about anything from milk to sweet or bubbly wine.

My Variations
I used whipped cream in both of my cakes, which I thought was yummier than a buttercream (of course, I didn't taste both!). The vanilla whipped cream just involved a little vanilla extract. The ginger whipped cream was a little more complicated but definitely worth it. My housemate Jessie made a ginger simple syrup by boiling water, sugar, and chopped ginger until slightly thickened, and then strained it. We chilled it, which helped it thicken up even more. We added a healthy measure of simple syrup to the whipped cream until it tasted sweet enough (but not too sweet!) and then added in tons of grated fresh ginger until the cream was sufficiently gingery (it did get more gingery in the fridge before we ate it). In both cases, I made the whipped cream pretty thick so it would spread well and hold the cake layers together. 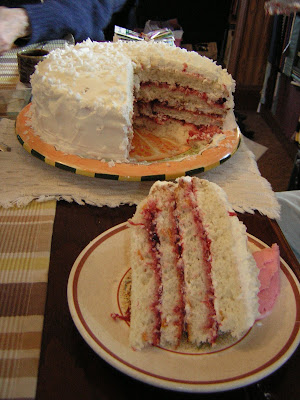