Ah, the joys of homemade pizza! This pizza dough recipe from Martha Stewart is so, so easy--you just pop everything in the food processor, pulse a few times, and it just comes together. It barely even needs to be kneaded! Then you're ready to top it with whatever you want. We covered the whole thing in pepperoni and mozzarella cheese, then added roughly chopped artichoke hearts to half and pineapple to the other half. Although the recipe says it makes 2 12-inch pizzas, we made one big pizza of indeterminate diameter (my housemate Kristi has a really neat pizza pan with holes in the bottom to help the crust get really crisp). The pizza tasted fabulous and was definitely worth the little bit of extra effort from just picking up the phone! 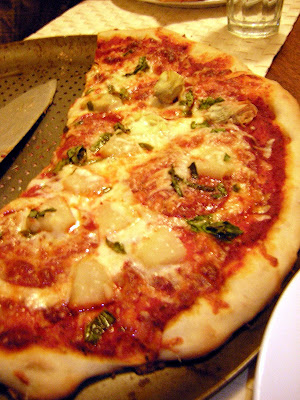 1. In a small bowl, sprinkle sugar and yeast over warm water. Stir with a fork until yeast and sugar dissolve. Let stand until foamy, 5 minutes.

2. In a food processor, pulse flour and table salt to combine. Add yeast mixture and oil, pulse until mixture comes together but is still slightly tacky. Dough should pull away cleanly from your fingers after it's squeezed. Turn out onto a lightly floured surface and knead four or five times until a smooth ball forms.

3. Place dough in a lightly oiled bowl, smooth side up. Cover with plastic wrap and let rise in a warm place until doubled in bulk, 40 minutes.

4. Punch down dough. Fold back on itself four or five times, then turn smooth side up. Replace plastic wrap and let rise again until doubled, 30-40 minutes.

5. Punch down dough. Turn out onto a lightly floured work surface. If making two pizzas, divide dough into two and knead each piece 4-5 times, then form a smooth ball. Return one ball to the oiled bowl; cover with plastic wrap. Pat the remaining ball into a flattened disk; cover with plastic wrap and let rest 5 minutes. Stretch dough into desired position, then place on pizza pan, wooden peel, or baking sheet that has been oiled or dusted with cornmeal.

7. Slide pizza onto baking stone or place pan in oven. Bake until cheese is melted and crust is crisp and golden brown (12-15 minutes). Meanwhile, fix up the second pizza if making two pizzas, and bake after the first pizza comes out of the oven. 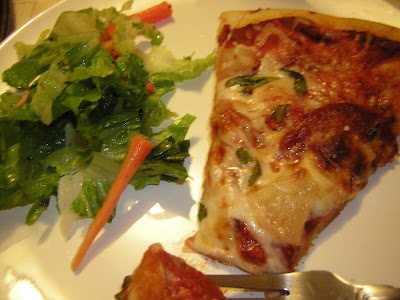