This dish is fairly easy to pull together, especially with two chefs, and it has great flavor. It tastes a little like mole, the Mexican chocolate sauce, but not spicy. My mom says it tastes very gourmet, and I agree--tons of flavor complexity for not much effort! We served the chicken with potatoes, but rice would also be a good accompaniment. Yum! 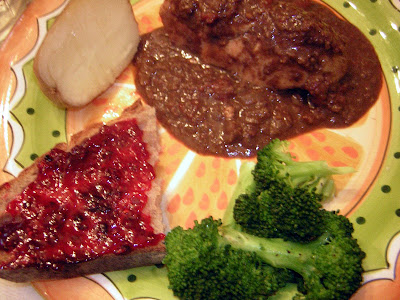 Chicken with Catalan Picada (adapted from Food and Wine)

1. Season the chicken with salt and pepper. If using skin-on chicken, brown the skin in 2 T of oil for about 4 minutes on each side. Transfer to a plate. If using skinless chicken, add in step 2.

3. Stir the picada into the sauce and simmer over low heat, uncovered, for 15 minutes, until chicken is fully cooked and sauce is slightly thickened. Discard bay leaf and orange zest and season with salt and pepper.

Picada (from Food and Wine)

1. Preheat the oven to 350 degrees. Toast the bread cubes and almonds until slightly browned, about 8-10 minutes.

2. In a small skillet, cook the garlic in the oil until lightly browned, about 3 minutes.

3. Put the garlic, oil, bread, and almonds in the food processor. Add the chocolate, parsley, cinnamon, and allspice and process until the mixture becomes a paste.
Posted by Sara at 1:12 PM