This pasta dish is incredibly colorful and flavorful, and also really quick to pull together--just my style! Roasted red peppers and just a little cream combine to make an unusual and delicious sauce, and the asparagus adds even more color and some textural contrast to the the pasta.

Of course you can roast the peppers yourself, but I just got mine from the olive bar at the supermarket and it worked out perfectly. (I've only roasted peppers myself once, and it didn't go very well--perhaps someday I'll tackle it again!) If you do roast your own peppers, you might want to reduce the number as I think they'd end up larger than the type you typically get at the store. The jarred variety would probably also work well. 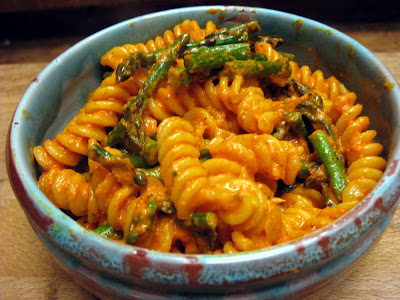 I used pencil asparagus as my other veggie in this dish, both because it was on sale and because I knew it would roast quickly (i.e. in the time it took to make the sauce!). You could definitely use larger asparagus; just peel it and leave more time to roast. I think other veggies like broccolini would also be great--anything that you think would taste good with roasted red pepper.

1. Preheat the oven to 400 degrees.
2. Place the roasted peppers, pine nuts, and heavy cream in a blender or food processor. Puree until very smooth. Reserve for later.
3. Bring a large pot of water to a boil, and cook the rotini until just shy of al dente.
4. Meanwhile, wash and trim the asparagus. Cut into 1-inch segments. Toss with olive oil and season with salt and pepper. Place the asparagus on a rimmed baking sheet and roast until crisp-tender and slightly caramelized. Be sure to check the asparagus often, as this thinner variety cooks very quicky.
5. Heat some olive oil in a large skillet over medium heat. Add the onion and saute until it just begins to soften. Add the garlic, and continue to saute until everything is nicely browned.
6. Reduce the heat to low, and add the roasted red pepper sauce and drained pasta. Toss until the pasta is al dente. Then toss in the asparagus and heat for just one minute more until everything is nicely heated through. Season to taste with salt and pepper. Serve with a light sprinkling of grated cheese. 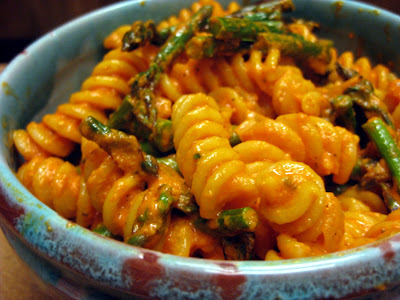 I'm submitting this post to this week's Presto Pasta Nights. Be sure to check out the other entries at Once Upon a Feast on May 1.
Posted by Sara at 7:11 AM