The July Daring Bakers' challenge was hosted by Nicole at Sweet Tooth. She chose Chocolate Covered Marshmallow Cookies and Milan Cookies from pastry chef Gale Gand of the Food Network. We had the option to bake either recipe, and I chose the marshmallow cookies.

I've been wanting to try my hand at homemade marshmallows for a quite a while now, so I was delighted to see it was part of the challenge this month! The marshmallows were much easier to make than I thought they would be. The "batter" (not sure what you'd call it since they're not baked!) was easy to whip up, and it piped beautifully. The gelatin worked perfectly to help the mallows set up firmly rather than drooping. The final marshmallows were soft, pillow-y, and perfectly sweet. I definitely want to try some of the flavored marshmallow recipes floating around soon! 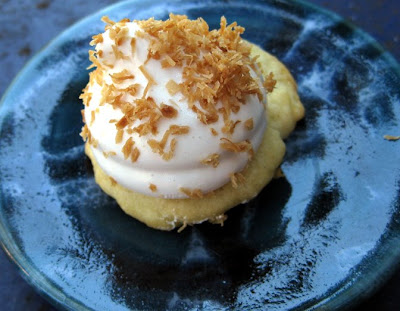 The marshmallows are piped onto a cookie base, which I wasn't so crazy about. First, it was a huge pain to work with because the dough was so soft. Second, although the cookies were crisp and delicious right out of the oven, they softened up as they cooled, especially once the marshmallows were on them. Overall, they just weren't flavorful or crisp enough to stand up to the marshmallow. Next time, I'd use a crisp, buttery shortbread recipe.

Finally, you might notice that my cookies aren't dipped in chocolate! For whatever reason, the chocolate topping just didn't appeal to me. Usually I'm a chocoholic, but chocolate covered marshmallows have never really been my thing. So, instead I opted to toast some unsweetened coconut in the oven and sprinkle it over the mallows before they had set. Yum! Thanks to hostess Nicole for a great challenge this month!

1. In a mixer with the paddle attachment, blend the dry ingredients.
2. On low speed, add the butter and mix until sandy.
3. Add the eggs and mix until combine.
4. Form the dough into a log, wrap in plastic wrap, and chill for at least 1 hour.
5. When ready to bake, grease a cookie sheet or line it with parchment paper or a silicon mat.
6. Preheat the oven to 375 degrees F.
7. Carefully slice the dough into thin rounds, returning the dough to the refrigerator as needed.
8. Transfer to the prepared pan and bake for 10 minutes or until light golden brown. Let cool to room temperature.
9. Pipe a “kiss” of marshmallow onto each cookie. Immediately sprinkle over the toasted coconut and then let set at room temperature for about 2 hours.
10. The cookies keep well in an airtight container at room temperature.
Homemade Marshmallows:
1/4 cup water
1/4 cup light corn syrup
3/4 cup (168.76 grams/5.95oz) sugar
1 tablespoon powdered gelatin
2 tablespoons cold water
2 egg whites , room temperature
1/4 teaspoon pure vanilla extract
1. In a saucepan, combine the water, corn syrup, and sugar, bring to a boil until “soft-ball” stage, or 235 degrees on a candy thermometer.
2. Sprinkle the gelatin over the cold water and let dissolve.
3. Remove the syrup from the heat, add the gelatin, and mix.
4. Whip the whites until soft peaks form and pour the syrup into the whites.
5. Add the vanilla and continue whipping until stiff.
6. Transfer to a pastry bag.