This month's You Want Pies with That? theme is vacation pies. When I thought of vacation, I thought of camping as a kid, which...let's just say it wasn't my favorite sort of trip! Sleeping on the cold, hard ground, a hike to the campground, and bugs. But! Camping did usually have s'mores, so there was that one silver lining. I decided to make a s'mores ice cream pie in honor of s'mores eaten on camping trips and at cookouts.

The graham cracker here is represented by a graham cracker crust. I just love homemade graham cracker crusts...so yummy with lots of crushed cracker and butter. Filling the crust is a toasted marshmallow ice cream. The ice cream base is your basic rich custard ice cream with just cream, sugar, and eggs. In the last few minutes of mixing, I added a toasted marshmallow swirl made of marshmallows melted with milk until caramelized. Finally, hot fudge sauce tops the s'mores pie to fill in for the traditional Hershey's chocolate and add some temperature contrast. 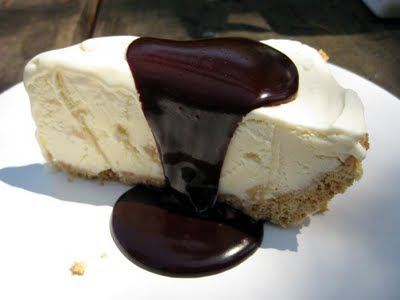 This pie is extremely rich but extremely delicious. Definitely try it in small slices!

1. As soon as the ice cream is churned, immediately scrape it from the ice cream machine into the graham cracker crust. Smooth the top, cover with plastic wrap, and freeze until firm.
2. Slice the pie with a knife dipped in hot water, and top each individual slice with hot fudge sauce. Leftover pie should be placed back in the freezer immediately (don't top it with hot fudge).

Mix together the graham crackers and sugar, and then mix in the butter with a fork. Press into a pie crust and chill until ready to use.

1. Place the marshmallows and 1/2 cup milk in a heavy-bottomed sauce pot and cook over medium-low heat, stirring constantly, until the marshmallows melt and the sauce attains a caramel color. Use a rubber spatula to stir so that you can scrape the edges and bottom well to pick up the caramelized sugar.
2. When the sauce is thick and caramel colored, add the remaining 1/2 cup milk and stir to combine. Cook until bubbling, and then scrape the sauce into a lightly oiled bowl. Let sit until cooled.

1. Make an ice bath by setting a 2-quart bowl inside a larger bowl filled with ice and water. Put a strainer over the bowl and pour the cream into the bowl.
2. Heat the milk, salt, and sugar in a saucepan until the sugar is dissolved and the mixture is just beginning to bubble.
3. In a separate bowl, stir together the egg yolks. Gradually pour some of the milk into the yolks, whisking constantly as you pour. Scrape the warmed yolks and milk back into the saucepan.
4. Cook over low heat, stirring constantly and scraping the bottom with a heat-resistant spatula, until the custard thickens enough to coat the spatula.
5. Strain the custard into the heavy cream. Stir over the ice until cool and then refrigerate to chill until completely cooled.
To make the ice cream:
Freeze the ice cream base according to the directions for your ice cream maker. In the last few minutes of freezing (after the ice cream base has partially solidified but is not completely frozen), add the toasted marshmallow by small spoonfuls.

1. Melt the chocolate and butter very slowly in a double boiler or in the microwave, stirring frequently until combined. Meanwhile, heat the water to boiling in the small, heavy saucepan. When the butter and chocolate have melted, stir the mixture into the boiling water. Add the sugar, corn syrup and salt and mix until smooth. Turn the heat up and stir until mixture starts to boil; adjust heat so that sauce is just maintained at the boiling point, stirring occasionally. Allow sauce to boil for nine minutes.

2. Remove from heat and transfer to the blender. Blend until the sauce is velvet-y smooth.

3. After it has cooled, the sauce can be stored in the refrigerator. Heat up just the amount you need in a small bowl in the microwave for about 30 seconds. 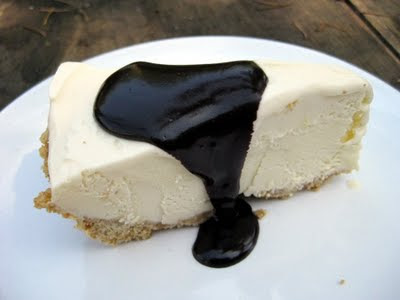