This is a great holiday dish that makes the typical scalloped potatoes (already one of my favorite-ever dishes) a little extra special with the addition of thinly sliced butternut squash.  Cooking the potatoes and squash together before layering them in the baking dish ensures that they're fully cooked with no crunchy bits where there shouldn't be.  This makes a big baking dish, so it will serve a crowd and would be great to take to a potluck.  You can change up the cheese if you like, but I highly recommend using smoked paprika here -- it adds a lovely depth of flavor. 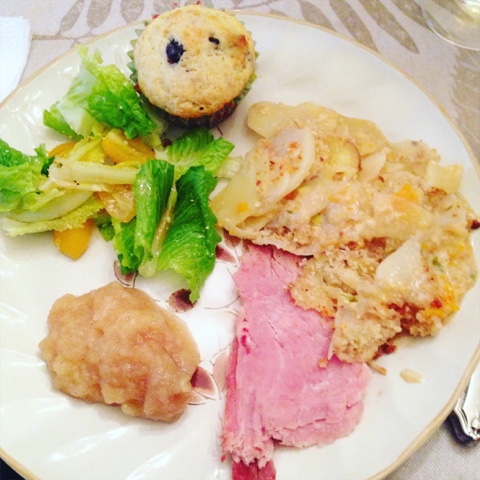 1. Preheat the oven to 400 degrees and spray a 9x13 baking dish with oil.
2. Combine all of the potato-squash mixture ingredients in a large soup pot.  Bring to a boil, and then simmer 8-12 minutes, until the potatoes are just tender.
3. Meanwhile, melt the butter for the filling in a large skillet.  Add the alliums, and cook over medium heat until nicely softened and browned.  Sprinkle with salt and pepper to taste.
4. In a separate bowl, toss together the Cheddar, parsley, and paprika.
5. Layer half the potato-squash mixture into the baking dish. Scatter the browned alliums and cheese mixture on top, and then add the remaining potato-squash mixture.
6. Stir together the topping ingredients in a small bowl, and sprinkle over the top of the potatoes.
7. Bake until bubbly and browned, uncovered, 25-30 minutes.
8. Let the dish sit, uncovered, for at least 10 minutes before serving. This allows the liquid to thicken slightly.
Posted by Sara Chatfield at 6:10 PM