This coffee cake from Mollie Katzen is super light and fluffy with a tasty hazelnut crunch on top.  Although it's still definitely a "treat" for breakfast, it's definitely lighter than many sorts of coffee cake as it's made with low-fat buttermilk (or skim milk mixed with lemon juice) and the topping contains no butter.  Sadly, it's entirely addictive so any "light" factor is counteracted by the extra piece you're bound to eat.  :-D  In any case, this coffee cake is easy to whip up in the morning and an excellent addition to any breakfast spread.  We enjoyed it for a special New Year's morning breakfast - yes, last New Year, I'm very behind on posting this one! - with mom, dad, and and grandma.  Yum! 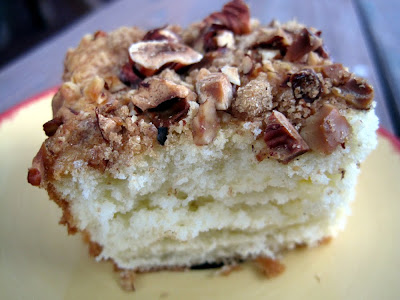 1. Preheat the oven to 350 degrees (or 325 degrees for a glass pan).  Lightly spray an 8-inch pan with nonstick spray.
2. In a large bowl, beat the butter on high speed until fluffy.  Add the sugar and continue to beat for another few minutes.  Add the eggs one at a time, beating well after each, and then beat in the vanilla.
3. In a second bowl, whisk together the flour, salt, baking powder, and baking soda. Set aside.
4. Add the dry ingredients alternating with the buttermilk (flour-milk-flour-milk-flour), mixing just to blend after each addition.
5. Scrape batter into pan, spreading evenly.
6. Mix together the sugar, cinnamon, and nuts and sprinkle over the coffee cake.
7. Bake 20-25 minutes, or until a tester comes out clean.  Cool a few minutes before serving. 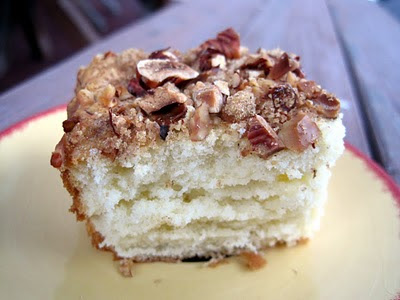 Tim bought me a box of tasty pears, and while I consumed most of them plain, I also used a couple of them in this fantastic quick bread.  It's nice and sweet with just the right amount of spice and a good crunch from the pecans.  I love how the pears are used in two ways - grated to keep the bread moist (much like the bananas in banana bread), and chopped to provide little bursts of pear flavor all throughout the bread.  The bread is wonderful warm, but also keeps well and is yummy cold for a few days (if it lasts that long!). 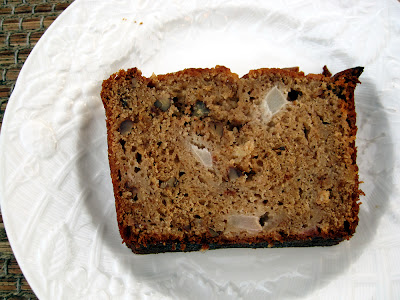 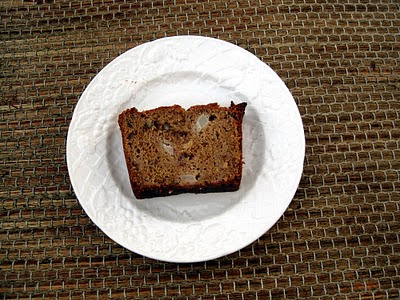 Sometimes you just have a lot of odds and ends of vegetables that need to be used up before they go bad, and that's when you turn to soup.  I was in just this situation when I created this soup recipe.  Luckily, it turned out to be absolutely delicious, with a nice meaty flavor from the bacon, acidity from the tomatoes, and sweetness from the squash.  Obviously, this is the sort of recipe where you should substitute whatever veggies you have around that need to be eaten, or change the spices around to suit your taste. 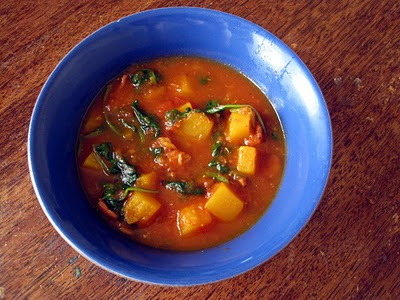 1. Heat a little olive oil in the bottom of a non-stick saucepan. Add the shallots, and saute until softened and starting to brown. Drain on a paper towel.
2. Wipe the pan clean and add the bacon. Saute until browned, and then add the squash. Saute for a few minutes, adding more oil if needed, until it begins to soften. Add the tomatoes, chicken broth, thyme, and vinegar, and then season with salt and pepper. Bring to a boil, and then simmer until the squash is cooked through and the liquid is somewhat reduced.
3. At this point, you can puree some or all of the soup with an immersion blender if you like - I pureed some of it while leaving some of the squash chunks whole.  Stir in the spinach until it wilts, taste for seasoning, and serve.
Posted by Sara at 9:07 PM 7 comments:

Wow, it's been way too long since I've posted!  I blame my boyfriend and also the Giants!  It was a great series, but I've been bad about doing a lot of cooking lately because I've been busy hanging out with Tim, watching baseball, and of course trying to get work done.  However, I'd say this soup is worth waiting for - I made it a couple of weeks ago and ate some at the time and froze a serving of it for later, which I ate for lunch today.  It freezes quite well, and overall the soup has great flavor.  Roasting the veggies before adding them to the soup gives a nice depth of flavor you don't get just from boiling them in broth.  Plus, fingerling potatoes are pretty much one of my favorite foods in the world.  Overall, this is a great fall soup that will keep you warm on a chilly day.  The chorizo is excellent, but you could substitute in any favorite sausage that you prefer. 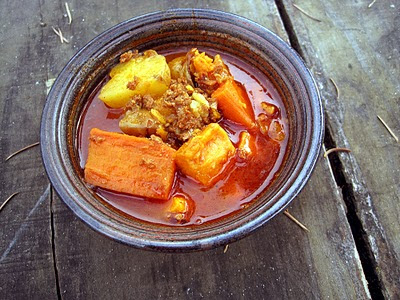 1. Toss the carrots, potatoes, sweet potato, bell pepper and garlic cloves with olive oil and spread out on a large sheet pan.  Season with salt and pepper.  Roast in a 400 degree oven until tender.
2. Meanwhile, saute the chorizo in a non-stick soup pot until it is browned.  Add the carrots, potato, and sweet potato.  Allow the pepper and garlic to cool slightly.  Peel the garlic, mash, and add to the soup.  Cut the pepper open, remove the seeds, and chop into bite-sized pieces.  Add to the soup along with the chicken broth.
3. Bring to a boil, and then simmer to allow flavors to combine.  Smash a few of the veggies with a potato masher or spoon to thicken the broth, if needed. 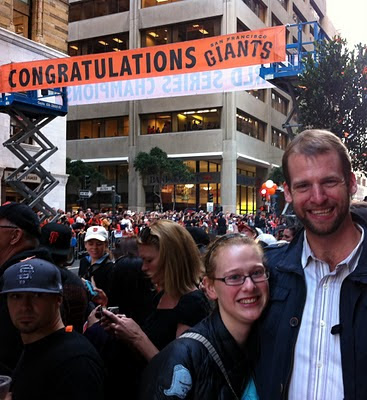 Tim and I celebrate the Giants victory at a parade in San Francisco.  Go Giants!
Posted by Sara at 5:49 PM 3 comments: