I ended up making this recipe because we had a huge container of leftover rice to use up.  Although it didn't manage to completely take care of our oversupply of cooked rice, it did make a substantial dent -- and it's delicious too!  I am a big fan of stuffed peppers in general (see, for example, this pork version and this pesto-potato version).  This Middle Eastern stuffed pepper is both vegetarian (vegan if you skip the cheese) and gluten free, but definitely not short on flavor.  It's spiced up with baharat spices from Raw Spice Bar, although you could use another Middle Eastern spice blend or make your own.  In addition to the spices, the rice mixture is flavored with currants for sweetness, almonds for a nutty crunch, and canned tomatoes to keep everything nice and moist.  Then the rice is piled into roasted peppers, baked a little longer, and finally blanketed under a flurry of Parmesan cheese. 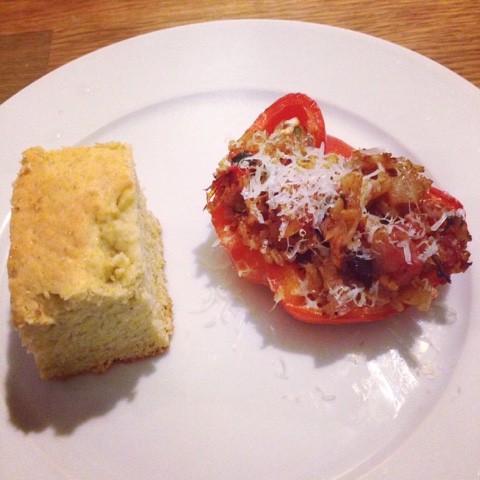 1. Preheat the oven to 375 degrees.  Spray a baking dish with oil, and spray the peppers with oil.  Arrange in a single layer, sprinkle with salt, and roast about 10 minutes.
2. Meanwhile, heat a good drizzle of olive oil in a non-stick skillet over medium heat.  Add the onion, and saute for 10-15 minutes, until nicely softened.  Add the almonds, and saute for another few minutes.  Add the tomatoes, rice, currants, parsley, scallion, and spice blend.  Season with salt and pepper. Stir well to combine and heat through.
3. Carefully divide the rice mixture among the pepper halves.  Cover with foil, and bake 25 minutes.
4. Remove the foil, and increase oven heat to 400 degrees.  Sprinkle the peppers with Parmesan cheese (or any other cheese you like -- crumbled feta would be great too!).  Return to the oven for 15 minutes.
5. Let cool a few minutes before serving.
Posted by Sara at 4:09 PM No comments:

This recipe from the Penzey's One magazine is pretty much the perfect skillet cornbread.  There's something special about cornbread baked in a cast iron skillet -- the edges get all crispy and browned, while the middle stays moist and tender.  This cornbread has excellent corn flavor and a little tang from sour cream.  Heating the skillet until hot and melting butter in it before adding the batter ensures those perfect buttery edges. 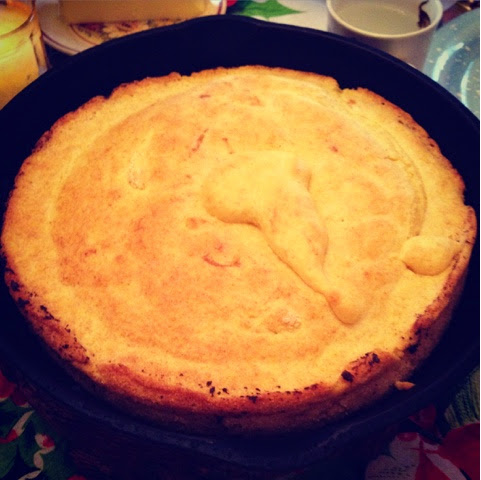 1. Preheat the oven to 425 degrees and place a large cast iron skillet in the oven to heat up.
2. In a large bowl, whisk together the cornmeal, flour, cream of tartar, baking soda, and salt.
3. In a separate bowl, whisk together the sour cream, eggs, milk, and oil until smooth.
4. Add a cube of butter the the skillet and let it melt. When the butter is melted, fold the wet ingredients into the dry ingredients until just combined.
5. Carefully remove the skillet from the oven and add the batter. Bake 20-25 minutes until the center is set and the crust is pulling away from the edges of the skillet.
Posted by Sara at 7:18 PM No comments:

I have very fond memories of this pudding from when I was a kid.  For one thing, the way it cooks up is like magic - you pour in one batter, but in the oven it separates into a cake-like upper layer and a soft pudding-like lower layer.  Plus, the subtle lime flavor pairs perfectly with the eggy batter.  You can also substitute lemon or orange, although I am partial to the lime flavor.  Leftovers can be stashed in the fridge and are very good cold, although I prefer this dish warm out of the oven...total comfort in a bowl. 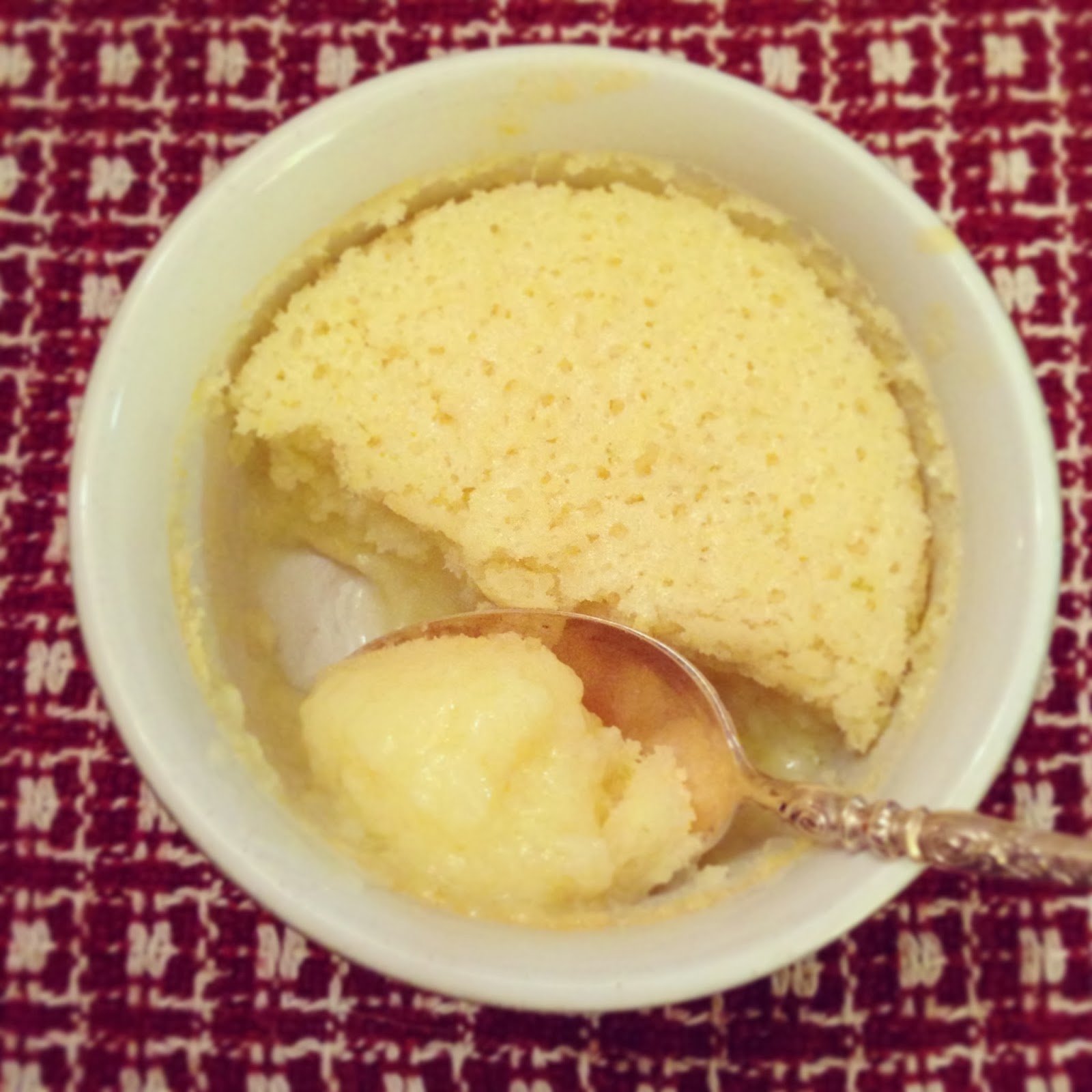 1. Preheat the oven to 325 degrees.
2. Combine the sugar, flour, and butter in a mixing bowl and stir to combine.  Add the milk, egg yolks, lime juice, and lime zest, and whisk until well incorporated.
3. Beat the egg whites with an electric mixer until stiff.  Gently fold into the rest of the batter.
4. Lightly grease four custard cups with butter.  Divide the lime mixture between the cups and then place in a 9x13 brownie pan.  Very carefully pour hot water into the pan until it comes about halfway up the sides of the custard cups.  Carefully transfer to the preheated oven.
5. Bake 35 minutes, until slightly set.  The top will be cake-like with a smooth sauce beneath.  Serve warm or cold.
Posted by Sara at 7:14 PM No comments:

I'm not sure why these blondies are named after Nancy Drew, but I am sure that this is a fantastic blondie recipe!  This recipe makes a blondie that is chewy and rich, rather than cakey -- the equivalent of the fudgey brownie in blondie form.  So tasty!  You can change up the mix-ins as you like...I like a mix of chocolate, nuts, and dried fruit, but go with what you like and have on hand. 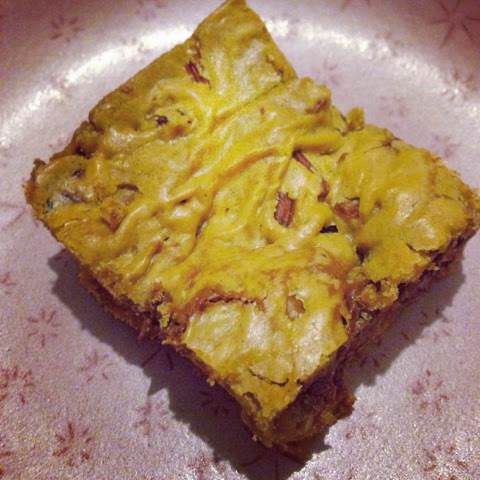 1. Preheat the oven to 350 degrees and spray an 8x8-inch square pan with baking spray.
2. Melt the butter in a medium saucepan.  Remove from the heat, and stir in the brown sugar, vanilla, and salt with a sturdy rubber spatula.  Quickly stir in the egg until free of lumps.  Add the flours, and stir until just combined.  Stir in the chocolate, cranberries, and pecans.
3. Spread the batter evenly into the prepared baking pan -- it will be very thick.
4. Bake 23-30 minutes, until the blondies are golden and crinkly on top and set in the middle. A tester should come out with just a few stray crumbs attached.
Posted by Sara at 7:11 PM No comments:

This fry bread taco is spectacular! It's one of those dishes that takes a little extra effort, but with results that are really unique and delicious.  The work here goes into making and frying the bread, which comes together easily but does require deep frying.  Because the bread dough has a neutral flavor, I recommend straining your oil back into a clean container after it cools to reuse for another deep frying project -- much less waste this way.  The bread puffs up dramatically and becomes golden brown and delicious.  You can top it with whatever taco toppings you like...I recommend lots of toppings, but keeping things pretty simple.

As with most deep fried foods, these breads do not keep well, so fry just what you will use. 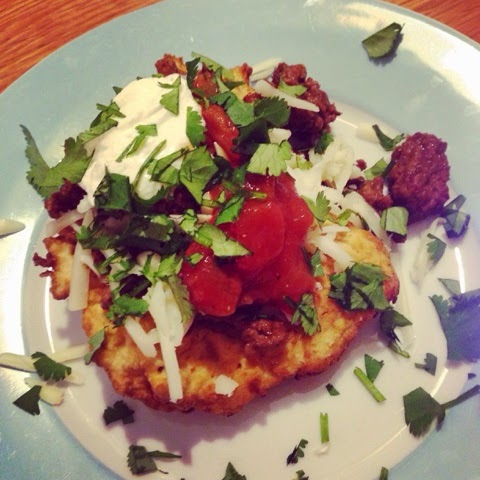 1. Whisk together the flour, powdered milk, baking powder, and salt. Add the water and stir with a fork until well combined.  You may need to use your hands to get everything incorporated -- but do not knead or the dough will be heavy!
2. Cut the dough into 8 pieces.  Flour a work surface, and press each piece of dough into a flat circle.  Let rest while you prepare your toppings and heat the oil.
3. Heat about 2 inches of vegetable oil in a deep, heavy pot (cast iron is ideal).  When it sizzles if you (carefully) drizzle in a few drops of water, you're ready.
4. Fry the bread one or two pieces at a time until well browned, the flip and cook the other side.  The second side will cook more quickly so keep a close eye.  Use a spider or slotted spoon to remove the cooked fry bread to a paper-towel-lined plate.  Be very careful of spattering oil!
5. Top with your favorite taco toppings and enjoy.
6. Let the oil and stove cool completely before transferring the oil to a disposable container to discard.
Posted by Sara at 6:19 PM No comments:

This vegetable soup bowl is a lot of fun because it combines hot, savory broth and noodles and raw, crunchy veggies and and herbs.  The broth is flavored with ginger, garlic, and soy sauce, and you can add any Asian-style noodles you like. We used udon, but I think rice noodles or soba noodles would also be delicious here.  The key to this soup is in the toppings -- you want a nice variety of thinly sliced veggies, plus fresh mint for an extra punch of flavor and peanuts for crunch.  This would be a good choice for a group of picky eaters, since everyone can top their bowl exactly how they like.  Because it's assembled with hot and raw ingredients, the soup does not keep well, so make just as much as you plan to eat. 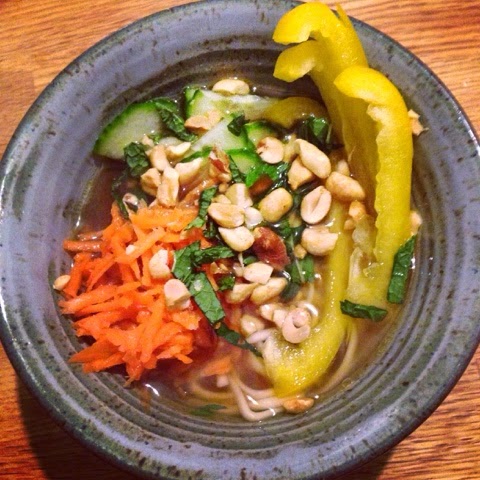 1. Cook the noodles according to package directions and drain well.
2. Meanwhile, heat a soup pot over medium heat.  Add the oil to the pan and swirl to coat.  Add the ginger and garlic and cook for 1 minute, stirring constantly.  Add the stock and soy sauce, and bring to a boil.  Lower the heat and simmer 10 minutes.
3. Divide the noodles among four serving bowls.  Pour over the broth.  Arrange the veggies, herbs, and peanuts on top of the noodles, and add a drizzle of Sriracha if you like you soup spicy.
4. If you are planning leftovers, store the stock, noodles, and vegetables separately.
Posted by Sara at 6:13 PM No comments:

I make a lot of tacos, but rarely make fajitas.  This is a fun way to change up Mexican night, and is just as quick as tacos.  I definitely recommend using a cast iron skillet to get a nice char on your chicken and veggies, since I think that's crucial to really good fajitas.  And don't forget all your favorite toppings -- here, we used sour cream, shredded cheese, salsa and guac for the ultimate fajitas! 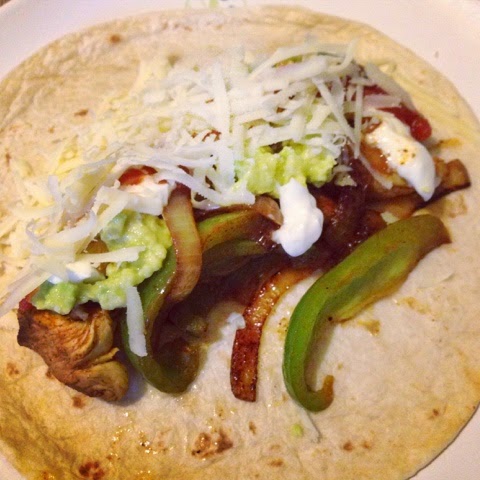 1. Place a large grill pan or two cast iron (or other) skillets over high heat.
2. Combine the bell pepper, chicken, paprika, and cumin in a large bowl.  Squeeze over the juice of half a lime and add a generous drizzle of olive oil.  Season with salt and pepper, and mix everything together.  Let marinate 5 minutes.
3. Add the chicken mixture to the hot grill pan or skillets and stir frequently for about 6-8 minutes, until the chicken is cooked through.
4. Serve the chicken-pepper-onion mixture sizzling hot with warm tortillas and the toppings of your choice.  Squeeze the remaining lime half over everything.