Quesadillas with Potato and Mustard Greens

This recipe is loosely based on this quesadilla recipe from Bon Appetit, with the same ingredients but a somewhat different preparation. I used leftover potato latkes in place of the potatoes in the original recipe because we had some; if you don't you'll likely want to use the suggested preparation or perhaps cook up some frozen hash browns. I also changed the method for using the mustard greens--pulling out the food processor for quick quesadillas seemed like way too much work! I just sauteed them in a bit of oil and loved the result. These quesadillas are unusual but delicious, with lots of different but complementary flavors going on. Yum! 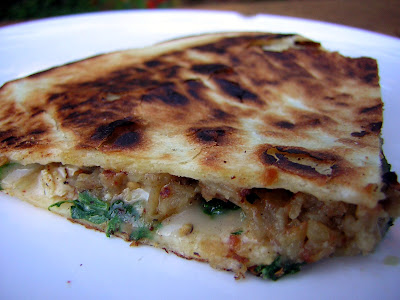 Quesadillas with Potato and Mustard Greens (based on this recipe from Bon Appetit)
Note: I'm not listing too many amounts here because it's really all to taste--just use however much you would like!

1. Crumble the potato pancakes in a small bowl and add chili powder to taste. Heat in a nonstick pan for a couple of minutes until warmed through. Return to the bowl and set aside.

2. Heat a little olive oil in the pan until shimmering. Add the mustard greens plus salt and pepper to taste. Saute for just a couple of minutes until the greens are beginning to wilt. Remove from heat and set aside.

3. On one flour tortilla, spread a layer of potatoes, followed by a layer of greens. (Try to space it out so you have the same amount for each quesadilla you're making!) Top with slices of goat cheese, tomatillo salsa, and grated Monterey Jack cheese. Place in a hot non-stick skillet (with no oil) and heat until the cheese begins to melt and the bottom of the quesadilla is well browned. Top with another flour tortilla and flip over to brown the remaining side. Repeat to make more quesadillas.