This soup is easy to pull together and really yummy. The roasted red pepper adds a unique flavor to the soup, and the beans add substance and protein. In this particular recipe, I didn't think making the beans "from scratch" added too much, so next time I might just open up a can of black beans to make the soup even speedier. It's excellent topped with a little sour cream - some chives would be tasty as well, though I didn't have any on hand this time. 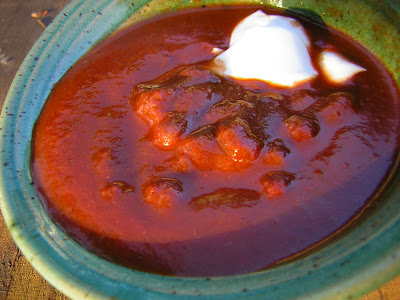 Pick through the beans for any stones & place in a pot with a lid. Cover with boiling water about 1 inch above the beans. Let sit until twice in size, at least an hour or two.

Meanwhile, heat the olive oil over medium-high heat in a pot. Add the onion and cook until it begins to soften. Add the garlic and cook until the onions and garlic are very tender. Stir in the peppers, oregano, parsley & a good pinch of salt. Cook or about 5 minutes, stirring occasionally. Add the chicken broth. Let cool until the beans are done soaking.

Once the pepper mixture has cooled for at least 15 minutes, use a blender to process it until smooth. You will need to do this in batches. Be careful not to fill the blender too full, especially if the mixture is still warm. Pour the pureed pepper mixture into a soup pot.

Stir in the soaked beans and bring to a boil. Cover and reduce heat. Simmer the soup for about 1 hour or until beans are tender. Use a fork to smash some of the beans if you wish to thicken it a bit more.

Serve with a dollop of sour cream.
Posted by Sara at 7:26 AM