I discovered this recipe in my backlog of unposted recipes, and just had to share it with you! It's from a lovely set of cupcake recipes given to me by my sister a couple of years ago. The original recipe was for carrot cake, but I substituted zucchini since I baked these in the middle of zucchini season when we were absolutely drowning in them! Zucchini and orange make an interesting and tasty combination, and the raisins and chopped nuts add texture and extra delicious-ness. The orange cream cheese frosting is absolutely to-die-for, and would be excellent on many kinds of cupcakes (or even some fancy muffins!). 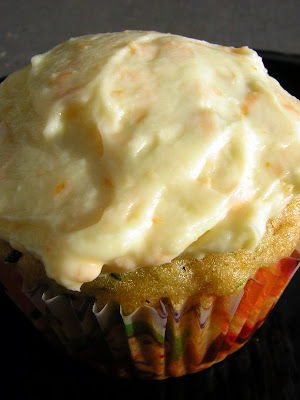 2. Sift together the flour, baking soda, salt, and cinnamon in a medium bowl. Set aside. In a large bowl, beat together the eggs and sugar on medium speed until smooth and thick, 1 minute. Stop the mixer and scrape the sides as needed. On low speed, mix in the oil, vanilla, and orange zest until blended. Mix in the flour mixture to incorporate.

3. Press down on the zucchini to extract as much liquid as possible. Add to the batter along with the raisins and walnuts and mix.

4. Fill each cupcake liner with 1/4 cup of atter. Bake until the top feels firm and a tester comes out clean, 28 minutes.

6. Frost the cupcakes once completely cooled. 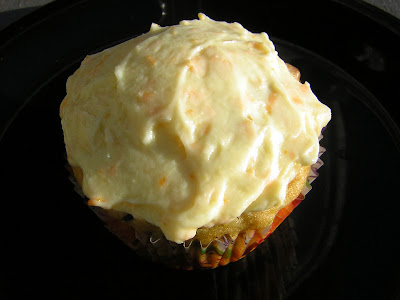