This steak salad has a long list of ingredients, but it's fairly easy to pull together - mostly they just get whisked together or chopped and tossed into a salad.  I love all the different components of the salad - peppery radishes, sweet and crunchy Asian pears, soft lettuce, and a little bite from the scallions.  And the dressing is delicious - it has good sesame flavor and a nice balance of richness and acidity.  Plus, it's hard to go wrong with topping your salad with steak!  The marinade for this steak was absolutely delicious and added a lot of flavor to an already flavorful cut of meat (We used flat iron, but something like sirloin or strip steak would be fine too).  The marinade did burn in the pan a bit (especially the parts that ran off into the oil rather than sticking to the steak), as I note below, but the steak was none the worse for the wear.  This one is definitely a winner! 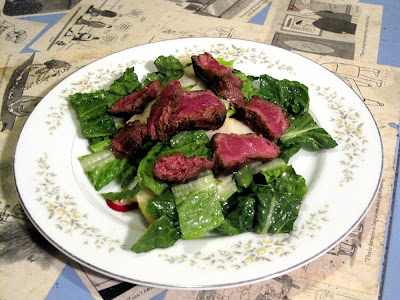 1. Whisk together the garlic, ginger, mirin, 1 T lemon juice, 1 T soy sauce, 1-1/2 tsp sesame oil, a pinch of salt, and a few grinds of pepper in a container large enough to hold the steak comfortably.  Add the meat, cover, and refrigerate for 30 minutes or up to 4 hours.
2. In a small bowl, whisk together the rice vinegar and fish sauce, along with the remaining 1 T lemon juice, 1/2 T soy sauce, 1-1/2 tsp sesame oil, and 1 T sesame seeds.  Set aside.
3. Cool the steak.  Heat enough oil to coat the bottom of the pan in a heavy-bottomed skillet over medium heat.  When it shimmers, remove the steak from the marinade and add it to the pan.  Cook until rare or medium rare, flipping the steak once.  Keep a close eye as the marinade has a tendency to burn (but don't worry too much if it does - ours burned quite a bit when it hit the parts of the pan around the steak, but the steak itself remained un-burnt and super yummy).
4. Remove the steak to a plate and cover with foil.
5. While the steak rests, combine the cucumber, pear, scallions, romaine, and radishes in a salad bowl.
6. After the steak has rested for at least 5 minutes or so, slice it thinly against the grain.  Toss the vegetables with the salad dressing and top with the steak.
Posted by Sara at 2:46 PM