Remember the Mexican Mac I posted about a while back?  This recipe is very similar, and is also based on a recipe from Homeroom in Oakland, but with a French twist.  Mild Monterey Jack cheese is supplemented with a sharp Swiss (of course you could use Gruyere if you want to be really French, but it would probably be a little wasted in mac and cheese).  Ham, tarragon, and scallions add tasty French flavors.  Then, the mac and cheese is baked in the oven under crispy panko breadcrumbs.  Yum! Total comfort food in a bowl. 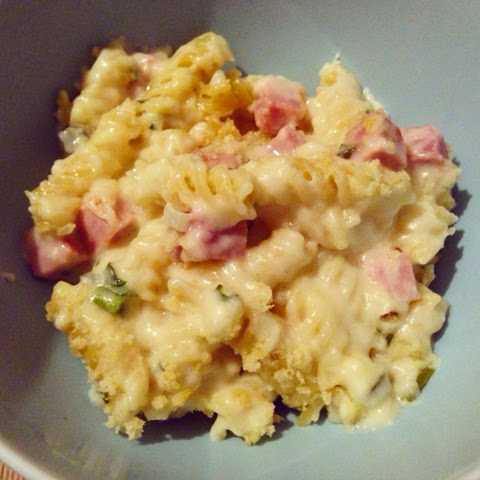 1. Preheat the oven to 400 degrees.
2. Put on a big pot of water to boil. When the water boils, add some salt along with the dried pasta, and cook until the pasta is al dente. Drain and keep ready until the cheese sauce is done. (You can cook the pasta while you prepare the sauce to save time)
3. Heat the milk in the microwave until it is hot but not boiling.
4. Heat a large, non-stick skillet over medium heat. Melt the butter in the skillet, and then add the flour and whisk constantly until the mixture turns light brown, about 3 minutes. Gradually whisk in the milk, using a silicone-coated whisk to protect the coating on the pan.  When the milk is incorporated and the mixture is smooth, cook for another 30 seconds or so.  The sauce should be thick and just bubbling.  Remove from the heat.
5. Stir in salt, grated cheese, cubed ham, scallions, and tarragon.  When everything is incorporated, add the pasta and sitr to combine everything.
6. Scrape the pasta into a baking dish (I used a 9x13 brownie pan).  Sprinkle with the panko.  Pop in the oven for 10-15 minutes, until the sauce is bubbly and the panko is lightly browned.
Posted by Sara at 7:27 PM