Ah, Nigel Slater, how I love you and your recipes!  He has such a way of painting a picture of food with words, and even his simplest dishes are always full of flavor.  Here, a three (yes, three!) ingredient chicken dish that makes for a super simple and delicious dinner.  Orange marmalade and whole grain mustard pair together beautifully in a sticky glaze for chicken drumsticks.  These two glaze ingredients have a lot going for them -- bitter, sweet, and mustard-y with a little crunch.  We roasted asparagus in the oven at the same time for a simple side -- just toss with olive oil, salt, and whatever spices you like and pop in the oven a few minutes after the chicken goes in. 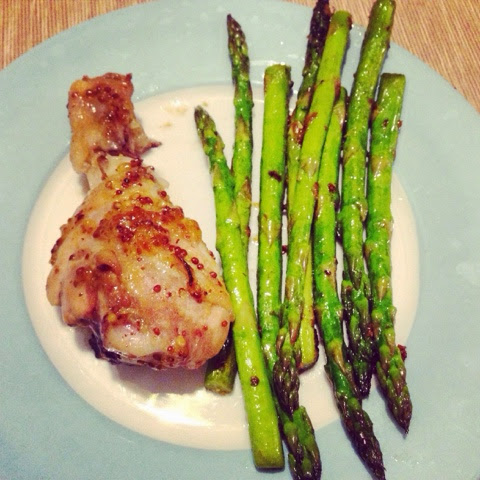 1. Preheat the oven to 400 degrees and line a baking sheet with foil.  Spray with oil.
2. Mix together the marmalade and mustard in a large bowl.  Add the chicken drumsticks and mix to coat them with the mixture.  Arrange the drumsticks on the baking sheet in a single layer.
3. Spoon the mustard-marmalade mixture that remains in the bowl over the drumsticks -- it's fine if some slides off, but just pile it on as best you can!
4. Roast about 30 minutes, until cooked through.
Posted by Sara at 10:40 AM