My housemate Jessie and I had a girls' night last night, which was superfun and exactly what we needed. As part of it, I made this Florida Pie, which was also perfect given the unseasonably warm weather we've been having. It's got a graham cracker crust, a layer of coconut cream, a layer of key lime pie, and then it's all topped with meringue. I even got to use our house's mini blowtorch to brown the meringue! The best part is that each component is extremely easy, so even though the pie looks amazing and has a lot of parts, it's actually totally possible to throw it together on a moment's notice. It's also completely delicious!

One note of warning--keep leftovers in the freezer...the fridge isn't quite cool enough to keep one or another part of it from getting a little liquid-y and making the crust mushy...not the end of the world by any means, but generally the freezer should prevent this (Dorie suggests letting it sit for 30 minutes to soften up before eating). 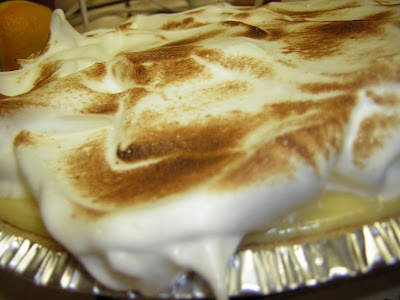 Florida Pie (From Dorie Greenspan's Baking from My Home to Yours)

1. Preheat oven to 350 degrees and put pie plate on a baking sheet
2. Put cream and 1 c coconut in a small saucepan and bring to a boil over medium-low heat, stirring almost constantly. Continue to cook until reduced by half and slightly thickened. Set aside to cool in a separate bowl.
3. Beat egg yolks on high until thick and pale. Beat in condensed milk and then half the lime juice on low speed. Add the rest of the lime juice and mix to combine.
4. Spread coconut cream into the graham cracker crust and then pour the lime mixture on top. Bake 12 minutes. Cool 15 minutes and then put in the freezer for at least 1 hour.
5. Put 4 egg whites and sugar in a saucepan and heat over medium low heat until the whites are hot to the touch. Transfer to a bowl and beat until the hold firm peaks. Fold in the last 1/2 c coconut.
6. Spread meringue over the pie and either run it under the broiler or use a kitchen blow torch to brown the top. Put the pie back in the freezer for at least 30 minutes to firm up. 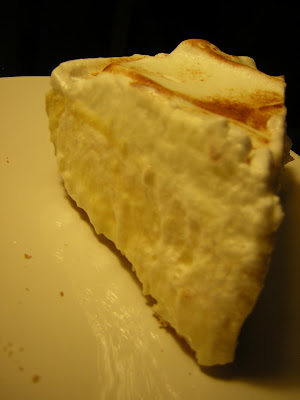