This cake has been in the works for about a year! A long time ago, my friends Kathryn and Chris found out that I had baked "pink" velvet cupcakes (red velvet cake without the food coloring) and they wanted me to make some for their wedding anniversary because they had red velvet cake at their wedding. When they made the request for red velvet cupcakes, my housemate Jessie and I immediately had the same thought--instead, I would make a mini wedding cake out of these adorable nesting metal pans we have. The pans are neat, maybe six or seven concentric circles that fit inside one another, and they worked perfectly for the job.

The recipe I chose was from The Great American Bake Sale, a neat cookbook that presents favorite recipes from a variety of chefs and cookbook authors. I've been very impressed with the recipes from this book in the past, so I thought I'd give Stephanie Hall's "No-Mistake Red Velvet Cake" a try. The cake was super yummy, moist with a good buttermilk flavor. It rose more than I thought it would, which created a little bit of a problem with my pans, but overall it worked really well and was easy to work with. The cream cheese frosting was also delicious, but way too runny to ice a faux-wedding cake. (I can see why wedding cake decorators use that gross frosting...it looks much nicer!) So, if I were making this recipe into cupcakes, I would certainly use Hall's frosting...but if I were trying to make a layer cake, I'd look for a firmer cream cheese frosting. It also may not have helped that this was a rather warm day! Overall, I was really happy with how the project turned out and Kathryn, Chris, and their son James seemed to like the cake as well! Thanks to them for these photos as mine didn't turn out as well. 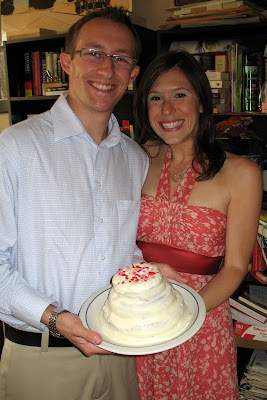 1. Preheat oven to 325 degrees. Grease 2 round 9-inch cake pans and line the bottom of each with a circle of parchment. Grease the parchment paper.

2. Combine all ingredients in a large bowl and beat on low speed for 1 minute until everything is incorporated. Scrape the sides and increase speed to medium. Beat for 2 minutes. Divide batter between prepared pans and smooth the surface with a spoon.

3. Bake 25-30 minutes until a toothpick comes out clean. Cool 15 minutes and then invert and remove from pan. 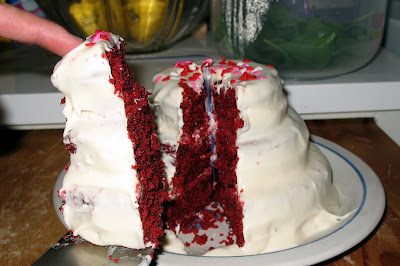 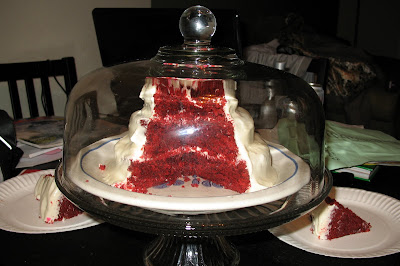