These yellow cupcakes are a snap and were a hit with teenagers and adults alike. Although they're simple to whip up, they're delicious and have a great sweetness that pairs well with chocolate frosting. 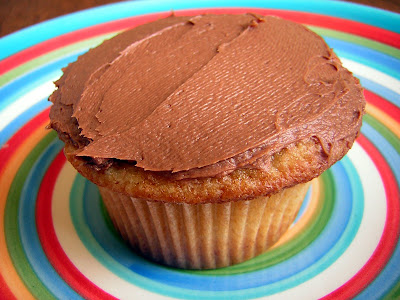 1. Sift together the flour, baking powder, baking soda, and salt into a medium bowl and set aside.

2. In a large bowl, beat the whole egg, egg yolk, and sugar on medium speed until thickened and lightened to a cream color, about 2 minutes. Stop the mixer and scrape the bowl as needed. On low speed, add the oil and vanilla until blended. Mix in the sour cream and then the flour mixture until everything is incorporated and smooth.

Whipped Milk Chocolate Frosting recipe is here; you'll probably only need a half batch, depending how much frosting you like.
Posted by Sara at 1:44 PM