I made these cupcakes for my friend Peter's birthday back in October and have finally gotten around to posting the recipe. It's slightly adapted from Cupcake Bakeshop by Chockylit, an excellent cupcake site that has since shut down but still has lots of delicious recipes in the archives.

This makes a light, delicate cupcake that is absolutely delicious. The flavors of lavender and citrus go very well together, and the frosting is quite versatile and tasty on other types of cupcakes as well. Whenever I make it, I usually select three different citrus fruits from the store (such as a lemon, an orange, and a grapefruit), but you could equally well use three of the same fruit to make, for instance, a lime-cream cheese frosting. Do use all the zest of whatever three fruits you choose, as it's needed to allow the citrus flavor come through. Don't add too much of the juice, though, or you will need to add too much sugar to get a spreadable frosting, making the frosting too sweet. The leftover mixed-citrus juice makes delicious cocktails with gin or vodka (or, for non-drinkers, you could mix it with simple syrup and water). 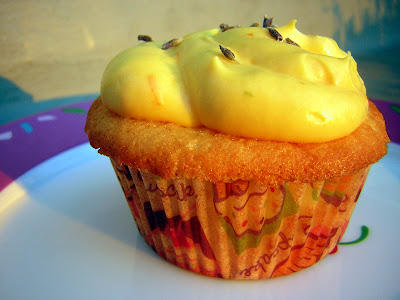 1. Cream the butter alone in the mixer for 1-2 minutes.
2. Rub the lavender flowers and sugar between your fingers. If you like, spin them together in the food processor to get smaller pieces of lavender, though this isn't necessary.
3. Add the sugar to the butter and beat until light and fluffy, about 2-3 minutes.
4. Sift the flour, baking powder, and salt together in a small bowl
5. Measure the milk and vanilla.
6. Add the flour mixture and milk mixture to the creamed butter in three parts, starting and ending with the flour and beating well after each addition. Set aside.
7. In a clean mixer bowl, beat the egg whites until soft peaks form. Gently fold into the batter until incorporated
9. Scoop batter into the prepared cupcake pans
10. Bake in a 350 degree oven for approximately 20 minutes or until a cake tester comes out clean.

1. Soften the butter in the mixer on high speed.
2. Add cream cheese and beat until combined.
4. Add about half of the confectioner’s sugar and the citrus juice and zest to the butter/cream cheese mixture and beat on high speed to combine.
5. Add the remaining confectioner’s sugar in stages until desired consistency and sweetness is achieved.
6. Add food coloring and mix until consistent color is achieved. Beat until light and fluffy.
7. Frost cupcakes and sprinkle with lavender flowers. 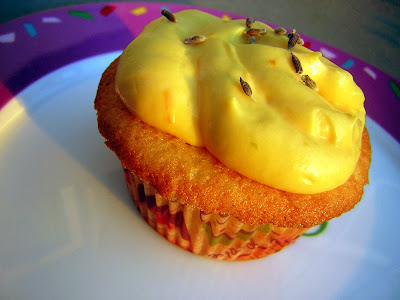