Although there have been various mentions of Pi Day in math classes throughout my life, I don't think I've ever actually managed to make a pie for the occasion! And I didn't quite manage to do so in this case either, as this is technically a tart...but hopefully it's the thought that counts. Happy Pi Day!

The theme for this month's You Want Pies with That? is herbs and spices. I did a lot of thinking about where I wanted to go with the theme. Since it still wasn't berry season when I made the pie, I knew I wanted to go with grapefruit, one of my most favorite winter fruits in baked goods. When I just searched for "Grapefruit Pie" online, I found mostly Jello-based pies, which wasn't quite what I was looking for (Jello is for New Year's Eve only, in my book!). I finally hit upon a Citrus-Chocolate Tart from Bon Appetit magazine, which sounded delicious but of course didn't incorporate herbs or spices at all. I ended up deciding to replace the butter in the original recipe with heavy cream, and then infuse the cream with my chosen herb(s). 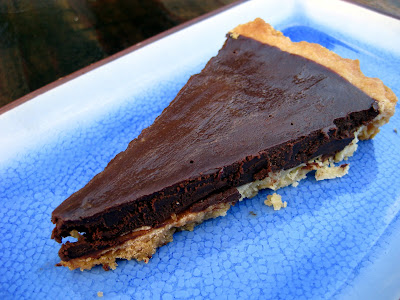 But then...which herbs to choose? I did some extensive consultation of The Flavor Bible, and eventually decided on tarragon and mint. The herb flavors were a bit too subtle in the final pie, and I think I'd double the amounts if I ever make this pie again, but they definitely did add something special. The grapefruit and chocolate flavors combined perfectly with the herbs, and although the filling was a bit bitter on its own, everything was perfect when paired with the sweet, crispy shortbread crust.

This is the absolute easiest crust I have ever made, and I highly recommend it. Unlike most recipes which require either a food processor (too many dishes!) or cutting in by hand (I'm lazy!), this one uses melted butter. The result is a crispy, crunchy, absolutely delicious crust. It pairs beautifully with the filling, which tastes a lot like the inside of a grapefruit-chocolate truffle. The tart is a little tough to cut into, so I might add more cream next time so the filling is a bit more "sliceable"--but it's perfectly delicious as is. 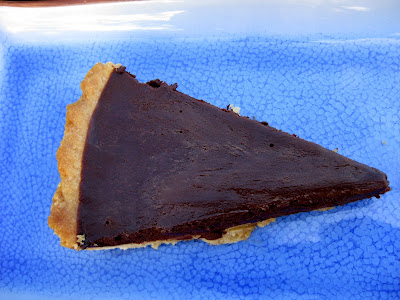 1. Make the crust: Combine the butter, sugar, vanilla, and salt in a medium bowl. Add the flour and stir just until blended; let stand 5 minutes. Press dough onto bottom and sides of a 9- to 91/2-inch-diameter tart pan with a removable bottom. Place in the freezer for 30 minutes.
2. Preheat the oven to 350°F. Bake the crust until deep golden, pressing down with back of spoon if bubbles form, about 25 minutes. Cool crust in pan on rack.
3. Infuse the cream: Combine the cream, tarragon, and mint tea in a small saucepan. Bring just to a boil, and then remove from the heat. Let sit until the cream is cooled to room temperature, at least 30 minutes.
4. Make the filling: Pour the cream through a strainer into the top half of a double boiler, pressing with a rubber spatula to extract as much liquid as possible. Add the chopped chocolate to the cream. Place over a pan of simmering water and stir constantly until the chocolate is melted and the mixture is smooth. Pour the chocolate mixture into a bowl.
5. Wash and dry the top of the double boiler. Put the egg yolk in, and whisk just to break it up. Whisking briskly, very slowly pour in the boiling water to temper the yolk. Place over a pan of simmering water and whisk constantly until the mixture reaches 160 degrees on a candy thermometer.
6. Pour the yolk through a strainer into the chocolate mixture. Add the grapefruit peel and stir everything together with a rubber spatula until combined and smooth. Pour the filling into the crust and tilt the pan to spread it evenly. Rap the pan onto the counter a few times to get rid of any air bubbles.
7. Let the tart cool to room temperature. Then, cover with plastic wrap and chill overnight or up to two days.
Before serving, let soften slightly at room temperature. 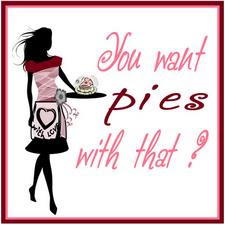 Final Pi Day tidbit: If you're trying to remember the digits of pi out a few more places than the average person (and WHO ISN'T?), just learn this saying: "How I wish I could recollect in simple terms its value." The number of letters in each word is the next digit in pi (3.1415926535)!