This post is my entry for the first ever Foodie Fight! This battle pits six food blogs against each other in a contest to cook up a special dish featuring two secret ingredients. The battle is over, but you can see the results at the Foodie Fight website: I got third place! :)

The secret ingredients for this battle were potatoes and lemons. I had a baked good all planned out, but then our oven broke! However, I think I ended up with something even better that didn't need the oven. I chose to make potato gnocchetti (mini gnocchi) with a creamy Meyer lemon sauce. I'm not going to lie--the gnocchetti were a huge pain to make, and I'm not one for fussy preparation. I made about one serving of the mini gnocchi, and then made the rest normal sized! However, if you're more patient than me, the gnocchetti were absolutely delicious...delicate, full of potato flavor, and absolutely amazing with the cream sauce.

The Meyer lemon cream sauce was very easy to make, and so yummy. I was a little worried about the cream curdling because of the lemon, but either the gin or the heat must have prevented that because the sauce was absolutely perfect. I would definitely try it again with either normal-sized gnocchi or pasta. It's very rich, though, so this dish is best in small portions as a first course. 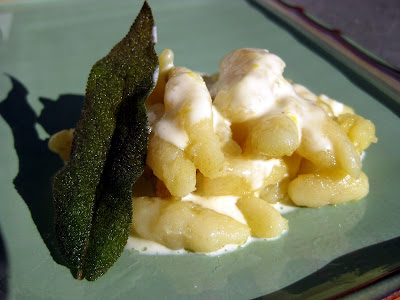 1. Cover potatoes with salted cold water by 2 inches in a large pot, then simmer, uncovered, until very tender, about 25 minutes. Drain in a colander and, when cool enough to handle, peel.

2. Force warm potatoes through ricer or fine sieve into a large bowl. Add flour and salt and stir with a wooden spoon until mixture begins to come together. Gently form dough into a ball.

3. Knead the dough on a floured surface until smooth, about 1 minute (if dough sticks to surface, dust lightly with additional flour). Cut evenly into 10 pieces. Roll 1 piece into a 14-inch-long rope (1/2 inch thick)rope 1/2 inch thick, keeping the remaining pieces covered with a kitchen towel. Cut the rope crosswise into 1/4-inch pieces and toss the pieces lightly with flour on work surface.

4. Press a piece of dough against tines of a floured fork and push in a forward rolling motion toward end of the tines, letting gnocchetti fall from the fork into a well-floured shallow baking pan. Make more gnocchetti in same manner.

6. Melt some butter in a large skillet. Add the gnocchetti and sautee until lightly browned. Transfer to four bowls and toss gently with the Meyer lemon cream sauce. Top with a crispy sage leaf. 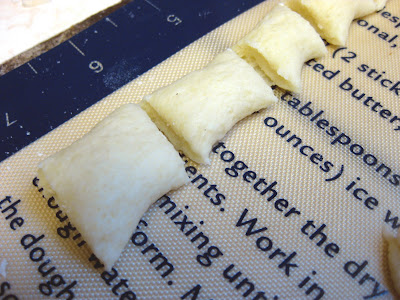 One-inch pieces of dough ready to be cut into quarters.

1. Finely grate the zest of one of the lemons; set aside. Cut a thick slice off both ends of the zested lemon to expose the flesh. Stand the fruit upright, then cutting from the top down, remove the peel, including all the white pith. Holding the fruit over a bowl to catch the juice, use a paring knife to cut along either side of each segment to free it from the membranes; let each segment fall into the bowl as you go. Once you’ve removed all the segments, squeeze any juice from the membranes into the bowl and then discard. Remove the seeds and set the segments aside in another small dish. Measure the juice in the bowl. Cut the remaining lemon in half and squeeze to obtain 2 T juice total.

2. In a 12-inch skillet over medium heat, place the cream, gin, and lemon segments and bring just to a boil. Lower the heat and simmer until the cream thickens slightly, 5 to 8 min. Remove from the heat.

3. Add the lemon juice to the sauce, along with the grated lemon zest. Season to taste with salt and pepper, and then toss with the gnocchetti. 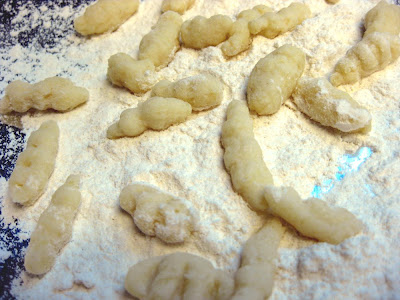 Teeny gnocchetti shaped and ready to be cooked.
Crispy Sage

Heat about 1 inch of oil in a small skillet. When the oil is hot enough to bounce a drop of water, very carefully add the sage leaves. Stand back in case the oil sputters! When the sage just starts to brown, turn off the heat and carefully remove the sage with a fork. Place the sage on a paper towel to drain off some of the oil.