I got enchanted by a pork belly recipe posted on Serious Eats the other day. Unfortunately, I couldn't find pork belly at the grocery store! I was actually pretty surprised - I thought the fancier Berkeley markets would have it. Luckily, the recipe suggested mustard greens and spareribs as possible alternatives, so I bought these instead. I was a little skeptical pulling everything together because I had to combine a few recipes, but the outcome was pretty good! The pork was tender and yummy, but could have been more seasoned; next time I'd add salt and pepper to the meat before searing. The recipe also produced a lot more broth than the original seemed to, probably because spareribs are bulkier than pork belly since there are so many bones. As such, this makes more of a Chinese-style soup, which we ate over rice. It would also be tasty with noodles, but either way it does seem to need something to serve it with. The mustard greens were an excellent addition - whether you make this with pork belly or spareribs, I definitely wouldn't leave them out. 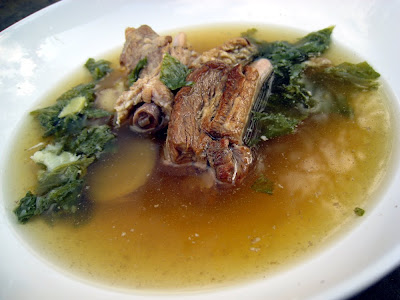 If the spare ribs are still connected in a long strip, use a knife to slice between each bone. The result should be small rib sections that are approximately 1″ by 2″.

Heat a large pan or dutch oven with 1/4 cup oil. Add ribs and brown on all sides, about 3-5 minutes. You will need to do this in 2-3 batches.

Pour the remaining 1/4 cup oil into a wok or a large pot over medium-low heat. Add the sugar and cook, stirring often, until the sugar dissolves. Then turn the heat to medium, and cook until the sugar turns "a rich caramel brown." Keep a close eye, as the sugar will burn easily. Add the pork and gin. Stir well. Then pour in enough water to just barely cover the pork. Add the ginger, star anise, chiles, and cinnamon. Turn the heat to high and bring to a boil. Reduce heat to a simmer, cover, and cook for 45 minutes to 1 hour, until the meat is cooked through and tender.

Meanwhile, chop the mustard greens into thin strips. In a separate pan, heat a bit more oil and add the garlic and ginger. Saute for about 30 seconds, and then add the mustard greens and chicken stock. Turn the heat down to low, cover, and cook for just a few minutes.

Remove the cover on the pork, turn the heat to medium and season with drizzle of soy sauce and a sprinkling of salt and sugar to taste. Add the greens and toss everything together for about 1 minute. Taste, and add more salt and/or ground cinnamon as needed.