Serious Eats did a feature a few weeks ago on tapas dishes that are easy to make and involve only a few ingredients.  I loved the idea, and got right to making three of the dishes for a fantastic dinner.  One word of warning - the yield on some of these is funny if you're making them as a dinner rather than as appetizers, as you'd expect.  All say they'll serve 4-6 as an appetizer, but even with doubling all three recipes, it wasn't quite enough for six for dinner.  (Luckily I had some of Dorie's magical Florida Pie in the freezer for dessert, so that filled everyone up!)  Other than that, though, all the recipes were super flavorful and delicious.  I made chickpea-chorizo stew (pictured below), as well as Escalivada Catalana (Catalan-style roasted veggies served with bread) and cauliflower with smoked paprika, both of which I'll post later this week. 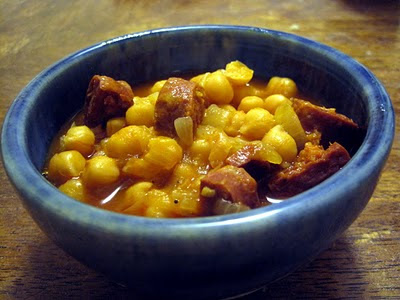 The chorizo-chickpea stew was fantastic, and it was amazing how much flavor you could get out of so few ingredients!  The recipe recommends cured chorizo, a sort I don't think I'd ever used before.  I usually buy the chorizo they have at the meat counter, which I believe is smoked but still needs to be refrigerated.  The cured sort is more like a hard salami that doesn't need to be refrigerated.  It introduced a great new flavor that I hadn't had before, and also added luscious richness to the stew.  Yum!  The best part about this dish (as well as the other tapas dishes I tried) is that they're fairly easy to pull together, so you really can make three or four of them in an evening without going crazy!  The variety makes for a nice dinner, since I usually don't make this many separate dishes.

Spanish Chickpea-Chorizo Stew (adapted from Serious Eats, original recipe here)
Serves 4-6 as an appetizer, or double the recipe to serve 4-5 for dinner as part of a multi-dish meal.