After making roasted butternut squash risotto, I couldn't resist trying another risotto recipe. This one used sun-dried and roasted-tomatoes as the main flavor, and they definitely didn't disappoint. I would rate this recipe as not quite as sublime as the butternut squash one, but still perfectly delicious.

I like that it has a few different components that all come together. The risotto itself is full of flavor from sun-dried tomatoes. I added about half again as many as were called for in the original recipe, but I think even more wouldn't have been amiss (I've doubled the sun-dried tomatoes in the recipe printed below). Once it's finished, the risotto is topped with toasted pine nuts for a crunchy topping and roasted cherry tomatoes for a burst of flavor. 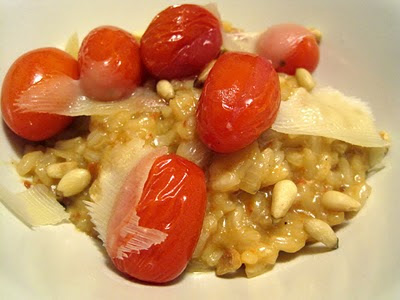 1. Preheat the oven to 400 F. Toss the cherry tomatoes with olive oil and season with salt and pepper. Spread on a foil-lined baking sheet and roast in oven about 10-15 minutes, until soft and slightly browned. Shake the tray occasionally during baking.

2. Melt the butter with the olive oil over medium heat. Add the shallots and garlic, and cook until they start to soften. Add the rice and cook, stirring, until edges of rice begin to grow translucent, about 2 minutes.

3. Add the white wine, and stir until absorbed by the rice. Stir in the sun-dried tomatoes. Gradually add the broth one cup at a time, stirring frequently, allowing each cup of broth to be absorbed by the rice before adding more. Rice is done when creamy and tender, but still a bit al dente.

4. Serve the risotto topped with roasted tomatoes and sprinkle with toasted pine nuts.
Posted by Sara at 3:00 PM