I haven't done a Cupcake Hero challenge in quite a while (in fact, looking back it appears the last one was Earth Day of 2008!).  But, the secret ingredient this month totally spoke to me: raspberries!  Raspberries are one of my all-time favorite fruits, and I also happened to have some in the fridge that needed to be used up.

I ended up adapting a raspberry-almond blondie recipe to serve as mini cupcakes. I have to say: I love mini cupcakes!  They're so cute and lots of fun.  Although I'm always a little worried when I try to adapt recipes (in this case, cutting the recipe in half and subbing some almond meal for part of the flour), I knew these were a winner when I took them out of the oven.  They rose perfectly, and smelled amazing.  The smell of cooked raspberry is just so delectable...super jammy and sweet smelling.  In terms of flavor, I'd say these are a bit between a muffin and a cupcake.  They're not so sweet that they'd be out of place at breakfast, but they have a nice pound cake sort of texture that certainly wouldn't be out of place at dessert - especially if you top these off with a bit of sweetened whipped cream! 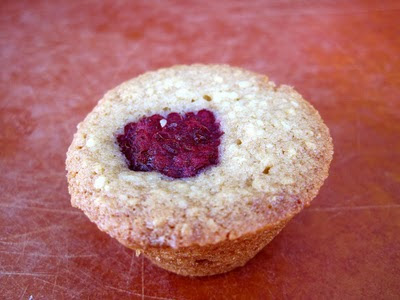 1. Spray a 12-cup mini muffin/cupcake tin with oil (preferably the kind with flour in the oil, found on the baking aisle).  Preheat the oven to 325 degrees.
2. Whisk together the flour, almond meal, baking powder, and salt, and set aside.
3. Cream together the butter and sugar, and then beat in the egg until well mixed, scraping down the sides of the bowl as needed.  Add the vanilla and beat to combine.
4. Beat in the dry ingredients until well mixed.
5. Divide the batter among the muffin tins, and then top each mini cupcake with a raspberry.
6. Bake about 22-24 minutes, or until a tester comes out clean.