When I saw these cinnamon rolls in a recent issue of Vegetarian Times, I knew I had to make them.  They sounded absolutely perfect for fall, full of spices and sweet potato. Although you can make these all in one day if you like, I adapted the recipe to be spread out over two - make the dough and assemble the rolls the night before, and then bake in the morning.  At least for me, I would not want to get up early enough to have these ready in time for breakfast otherwise!  This approach worked out perfectly so that I could just get up a little bit before we wanted to eat.

The cinnamon rolls themselves were fantastic.  The sweet potato gave the dough a lovely orange color and an amazingly tender texture.  The dough itself isn't overly sweet, so it pairs well with the sweet cream cheese glaze.  You can really use any nut you like here (or none at all) - the original recipe called for pecans, but they were $14/pound at the store while almonds were $4/pound!  What gives - is there a pecan shortage or something? I don't recall them being so much more expensive, but maybe I'm just unobservant! In any case, almonds worked well as a pecan substitute to add a little crunch to the cinnamon rolls.  If you don't have a big enough crowd to finish this pan in one sitting, these rolls do actually keep really well - just cover and refrigerate, and reheat for about 30 seconds in the microwave.


Don't forget to enter my giveaway for a lifetime membership to Eat Your Books! 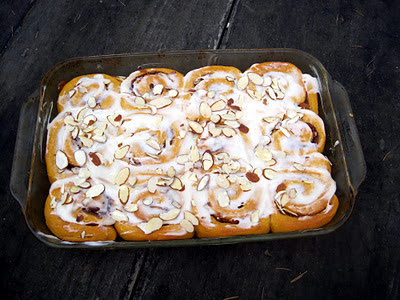 1. Make the dough.  Stir the yeast into 1/3 cup of the warm water, and sprinkle with a pinch of sugar.  Let stand 10 minutes, until the yeast blooms.
2. Whisk together the flours, sugar, and salt.  Set aside.
3. Stir the remaining 1/3 cup warm water, the sweet potato, and the oil into the yeast mixture.
4. Stir the wet mixture into the flour mixture.  Knead the dough until soft and elastic, adding more flour or water if needed.  Place the dough in an oil bowl, cover, and let rise until doubled (about 1 hour).
5. Make the filling.  Stir together the sugar, cinnamon, cardamom, and 2 T of the butter.  Grease a 9x13 baking dish with the remaining 1 T butter.
6. Punch down the dough and roll it out into an approximately 14x12 rectangle.  Spread with the spiced butter mixture.  Sprinkle with the almonds.
7. Starting at the long edge, roll up the dough.  Slice a bit off each end and discard since these won't be the right size/have the full amount of filling.  Using a serrated knife, gently slice the rest of the log into twelve equal pieces (it's easiest to start cutting in the middle, then cut each piece in half again, and finally cut each quarter into thirds).
8. Arrange the cinnamon rolls in the greased baking dish, slightly touching.  Cover tightly with plastic wrap, and place in the fridge overnight.
9. In the morning, preheat the oven to 375 degrees.  Pull the cinnamon rolls out of the fridge and allow to sit until they come to room temperature and are slightly puffy.  Bake 18 to 20 minutes, until golden brown.
10. Make the glaze:  Stir together the cream cheese and the powdered sugar.  Stir in the salt and maple syrup.
11. Drizzle the glaze over the cinnamon rolls while they are still warm and spread to coat.  Sprinkle with the almonds, and serve warm. 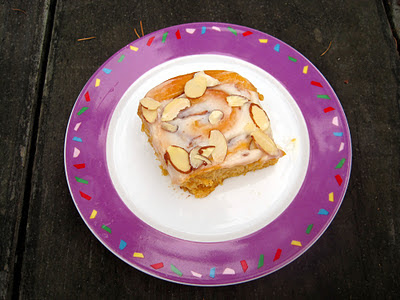 Come join the fun at the My Baking Addiction and GoodLife Eats Holiday Recipe Swap sponsored by Red Star Yeast.  I'm also sending this post off to These Chicks Cooked.
Posted by Sara at 12:10 PM