We had some cream about to go bad over Christmas, so ice cream was the perfect solution!  This cinnamon-scented ice cream smells fantastic and tastes even better.  It's absolutely divine with a bit of toasted coconut sprinkled over top.  Unlike some homemade ice creams, it keeps a nice soft texture in the freezer rather than becoming rock-hard, so it's easy to scoop.  I also like that it doesn't involve making a custard - although that sort of ice cream is definitely delicious, it was nice to skip the extra step. 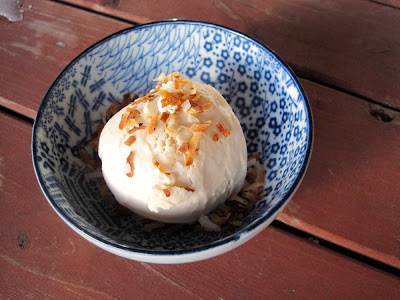 1. Combine the half-and-half, brown sugar, salt, and cinnamon sticks in a saucepan over medium heat.  Bring almost to a boil, stirring often.  Remove from heat, cover, and let the cinnamon steep for one hour.
2. Strain the cinnamon mixture into a bowl, and stir in the remaining cup of heavy cream.  Chill until cold, at least four hours.
3. Freeze in an ice cream maker.  Eat immediately for a soft consistency, or scoop into a container and freeze for a few hours for a firmer consistency.  Serve with toasted coconut, if desired.


I'm sending this recipe off to These Chicks Cooked!
Posted by Sara at 10:07 PM