When this recipe appeared in my inbox, I knew I wanted to make it for dinner.  This unique spin on pesto is the perfect recipe for asparagus season, when the grocery store is overflowing with bright green stalks.  I'm actually not a huge fan of traditional basil pesto, but this version is absolutely perfect.  The flavor is less assertive, slightly sweet from the asparagus and nutty from the almonds.  The roasted tomatoes add a great hit of acid to round everything out.


I forgot to add olive oil to the pesto while making it, and so I inadvertently ended up with a somewhat healthier pesto.  Feel free to add 3 T olive oil to the pesto while pureeing it if you like, but I found that the dish was plenty delicious without it - I just ended up adding a little extra pasta water to make the pesto loose enough to toss with the pasta.  The dish was fantastic, but didn't keep well in the fridge - leftovers were certainly edible, but nowhere near as tasty.  So, try to make just as much as you'll eat for dinner. 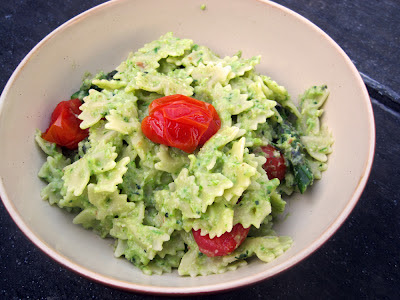 1. Preheat the oven to 425 degrees.  Line 2 baking sheets with foil.  Bring a large pot of salted water to a boil.
2. Put the asparagus on one baking sheet and the tomatoes on the other.  Drizzle with oil, sprinkle with salt, and toss to combine.  Roast until the tomatoes are soft and starting to burst, and until the asparagus is slightly caramelized - about 10 minutes for the tomatoes and 15 minutes for the asparagus (depending on size).  Shake the pans a couple of times during roasting.
3. Place the almonds in a large non-stick pan over high heat.  Toast until golden in spots, stirring or shaking the pan often.
4. When the asparagus is done, cut off the tips and reserve.  Combine the asparagus stalks, toasted almonds, basil, and Parmesan cheese.  Puree with either a food processor, blender, or hand blender until slightly chunky.
5. Cook the pasta in the boiling water until done.  Reserve a cup of the pasta water, and then drain the pasta.
6. Combine the pasta and pesto, along with enough pasta water to create a loose sauce.  Gently toss in the roasted tomatoes and asparagus tips.  Serve, seasoned with salt, freshly ground pepper, and additional Parmesan cheese.
Posted by Sara at 6:28 AM