This fantastic recipe has been waiting in my "to post" list for months now because I hadn't gotten around to actually typing up the recipe! My mom and I actually made this last January, but it's definitely more of a summer soup with zucchini, corn, and tomatoes.  I'm excited to make it with summer veggies this season!  The soup is full of fantastic vegetable flavor, and a little bit of cream and cheese adds plenty of richness.  A bit of minced chile adds a little heat, but you can certainly add more or less depending on your interest in spiciness (the soup recipe as written is just slightly spicy).  Although the recipe includes two steps - roasting the tomatoes and making the soup - the tomatoes can actually be roasted while you begin sauteing vegetables, so the overall time to prepare the recipe isn't too overwhelming.  Leftovers also keep well, if you have them! 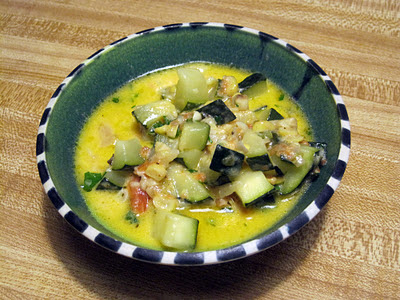 1. Preheat the broiler (or preheat the oven as hot as it will go and place an oven rack on the top shelf of the oven).  Line a baking sheet with foil.
2. Core the tomatoes and cut a small "X" through the skin on the bottom.  Place the tomatoes, cored-side-up, on the baking sheet.  Roast until the tops and have blackened and the tomatoes are cooked all the way through, about 20 minutes.  Slip the skins off the tomatoes and discard the skins.  Coarsely chop the tomatoes.
3. Meanwhile, heat the oil in a heavy soup pot over medium high heat.  Add the onions, garlic, and chile and cook, stirring, until softened, 3-5 minutes.
4. Add the corn, oregano, nutmeg, and pepper.  Cook, stirring, until the corn is lightly browned, about 7 minutes.  Add the zucchini and cook, stirring, until just tender, 3-5 minutes.  Add the tomatoes, crema, cheese, and salt.  Cook, stirring, 5 minutes more.  Season to taste with additional salt, and stir in the cilantro just before serving.
Posted by Sara at 8:00 AM