I rarely get Rachel Ray's magazine because I don't tend to find many recipes in it that I want to cook, but I caved on a recent plane trip.  Something about airplanes just makes me want to read food magazines for hours!  Luckily, this time I actually found a couple of recipes that I wanted to take for a spin, and this braised chicken was one of them.  It's great in that it's pretty simple to make and very tasty, plus leftovers keep well. (This is a big one for me lately because we definitely don't have time to cook every night and we've been trying to cut back on eating out.)  The most complicated part of the recipe is browning the chicken - it's not hard, but there are definitely some splatters and you might need to use two pans depending on how much chicken you're making and the size of your pot.  After that's done, everything else is pretty easy and most of the time is hands off while the chicken cooks in the oven.  I did think the sauce was fairly mild flavored for something made with strongly flavored ingredients (mustard and beer), but it was very yummy nonetheless - just be sure to season well.  I loved that the peas go in the pot with the chicken, since you don't have to think about preparing a separate veggie if you don't want to. 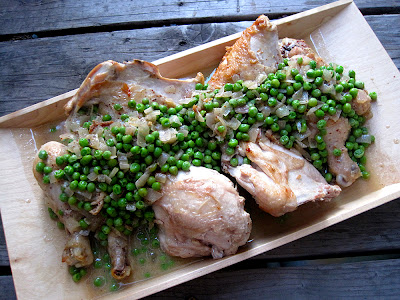 1. Preheat the oven to 350 degrees.
2. Season the chicken with salt.  In a large ovenproof skillet or Dutch oven over medium high heat, add enough oil to cover the bottom of the pan.  When the oil is hot, brown the chicken, turning as needed.  Be very careful about spattering fat.  You may need to work in batches (or use two pans) depending on the size of your pan.  Transfer the chicken to a plate.
3. Add the onions to the pot and cook until beginning to brown, 5-10 minutes.
4. Add the beer and mustard and stir with a wooden spoon, scraping up any browned bits from the pan.
5. Return the chicken to the pan in as even a layer as possible (it doesn't need to be perfect).  Cover the pan with an ovenproof lid or a large piece of foil.  Pop in the oven and cook 15 minutes.  Remove from the oven and flip the pieces of chicken, making sure any parts that weren't in the liquid before are now in the liquid.  Cook another 15 minutes, or until the chicken is cooked through (160 degrees on a meat thermometer).
6. Using tongs or a slotted spoon, transfer the chicken to a serving platter.  Place the pan over high heat and add the peas.  Simmer about 5 minutes, until the peas are tender and the sauce is slightly thickened.  Taste and season with salt and pepper.  Pour the sauce over the chicken and serve.
Posted by Sara at 6:54 PM