I always forget how easy and delicious quiche is, especially if you use a pre-made crust from the grocery.  I like the sort that comes rolled up in the refrigerated section; the package isn't too big, so you can stash it in the freezer until the mood strikes.  Quiche is also a great way to use up whatever veggies, cheeses, and/or meats that are hanging out in the fridge.  In this case, I had both spinach and chard from our CSA box, as well as part of a package of bacon.  (Yes, I know that The Enchanted Broccoli Forest is a vegetarian cookbook, but I couldn't resist!)  This quiche is definitely on the rich side, even using skim milk, and makes a really delicious dinner.  Do be sure the center is really cooked through (not jiggly) before pulling it out of the oven - mine was a bit underdone, but still very tasty. 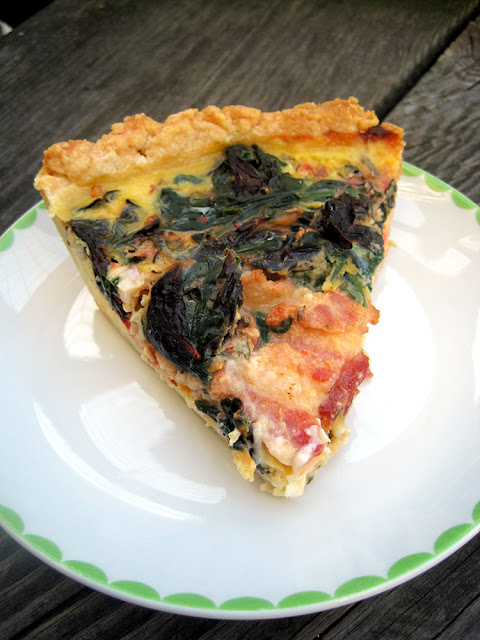 1. Fit the pie crust into a 9-inch pie plate.  Scatter the cheese over the crust, and then set aside.
2. Preheat the oven to 375 degrees.
3. Heat a non-stick skillet over medium heat.  Add the bacon, and cook until just crisp, stirring often.  Transfer to a paper towel to drain, leaving the fat in the pan.
4. Add the onions, and saute until translucent.  Add the chard, and saute until the greens are just starting to wilt.  Add in the spinach, and continue to cook until the greens are all wilted.  Transfer to a paper-towel-lined strainer and let drain for a few minutes.  Once they're cool enough to handle, squeeze out as much moisture as possible.
5. In a medium bowl, whisk together the eggs, milk, and chile flakes.  Season with salt and pepper.
6. Assemble the quiche.  On top of the cheddar cheese, layer on the bacon, followed by the greens.  Be sure to fluff the greens up a little so they aren't overly compressed in the quiche.  Pour over the egg-milk mixture.
7. Bake 40-45 minutes, until firm.  Cool about 10 minutes before serving.