I made these tasty muffins for the Sunday morning cafe at my church. I was a big fan of how they turned out - lightly sweet, but not so sweet that you feel like you're eating dessert.  Using half whole wheat flour makes the muffins feel heartier but not overly heavy or dense.  And, I loved the chunks of pear scattered throughout the muffins.  I tend to turn to apples for my winter fruit baking needs, and pears are a great change of pace.  Don't shy away from the spices in this recipe - it seems like a lot, but at least to my taste, these are perfectly spiced without being over-the-top.  You could also add minced crystallized ginger if you like (I'm not a big fan of it, so I skipped it). 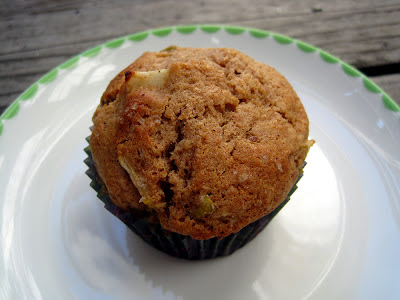 1. Preheat the oven to 425 degrees.  Spray the top of your muffin tin with non-stick coating and place muffin cups in all the wells.  (You can do this in multiple muffin tins and bake two at once, or use the same muffin tin and refill after each batch - either works fine.)
2. Add the butter to the bowl of a stand mixer and mix on high for about 30 seconds, until light.  Add both sugars and cream one minute more, until light and fluffy. Mix the eggs in one at a time, until fully incorporated (about 30 seconds per egg).  Beat in the vanilla.
3. In a medium bowl, whisk together the flours, baking powder, cinnamon, ginger, salt, and nutmeg.
4. With the mixer on low speed, mix in the flour mixture and milk in alternating additions (flour-milk-flour-milk-flour).  You may want to hold a towel over the top of your mixing bowl if you don't have a cover to avoid flour flying everywhere!  Be careful not to overmix - it's ok if some of the flour isn't totally incorporated.
5. Scrape down the sides of the bowl with a rubber spatula and then dump in the pears.  Fold to combine, until the pears are relatively evenly distributed throughout the batter.
6. Scoop batter into the muffin cups, filling them a little above the rim of each cup.  Sprinkle the tops with cinnamon and sugar (I used a Trader Joe's cinnamon-sugar grinder).
7. Place the muffin tin(s) in the oven and immediately turn down to 400 degrees.  Bake about 20 minutes, until a tester comes out clean.
Posted by Sara at 6:12 PM