Steak, potatoes, and salad...how can you go wrong?  Well, ultimately I liked this recipe, but it didn't 'wow' me.  All of the components were tasty enough, but they didn't quite come together into a unified dish.  The steak and potatoes made a nice salad, and the dressing was very tasty - you can't really go wrong with a dressing based on bacon fat.  But, it felt a little disjointed from the greens, like it was a warm potato salad just stuck on lettuce - that said, it's not a bad way to eat your vegetables. :) Granted, I didn't use tenderloin as specified in the original recipe, because there's no way I would spend that much money on a weeknight recipe or just to slice up in a salad!  If I'm going to buy expensive steak, I'm going to eat it as a steak, and probably for a special occasion.

Overall, this was a yummy dinner but probably not something I'd make again in its current form.  Next time, I'd probably skip the bacon (which was good, but sort of over the top), and instead toss the potatoes and steak with a simple vinaigrette, high on the acid to cut through the richness.  Then, I'd do a Caesar salad sans-croutons underneath to bring in that creamy element and, well, because I love Caesar salad dressing.  With a few tweaks, I do think the idea of a steak-and-potatoes salad is a fun one that could be very successful. 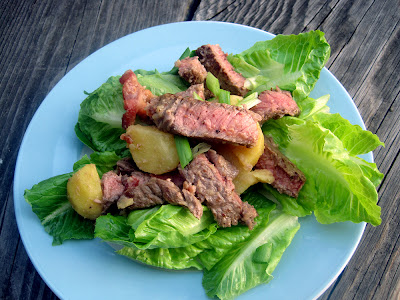 1. Bring a large pot of water to a boil.  Add the potatoes, along with a generous pinch of salt.  Reduce heat, and simmer 12-15 minutes, until the potatoes are tender.  Drain and set aside.
2. Meanwhile, heat a medium skillet over medium high heat.  Add the olive oil to the pan and swirl to coat.  Season the steak with salt and pepper.  Once the oil is hot, add the steaks.  Cook until it's as done as you like (will depend on the thickness of the steak and how you like it cooked).  Remove from the pan, cover with foil, and let sit until ready to use.
3.  Turn off the heat, wipe out the skillet, and then return to medium heat.  Cook the bacon until crisp, and then transfer to a paper towel-lined plate.
4. Pour off all the bacon fat from the pan except about 1-1/2 T.  Add a pinch of salt, a few grinds of pepper, and the flour.  Cook 30 seconds, stirring constantly.  Whisk in the vinegar, 3 T water, sugar, and mustard.  Cook for a minute or so, until slightly thickened.
5. Pour the sauce over the potatoes. Then thinly slice the steak, against the grain, and add to the potatoes.  Crumble the bacon, and add to the potatoes and steak.  Toss everything together.
6. Arrange the lettuce on plates.  Top each plate with a scoop of the potato-steak salad.  Sprinkle with the green onions and serve.
Posted by Sara at 3:43 PM