Classic Mac from Homeroom in Oakland

First off - don't forget to enter my giveaway for cacao nib olive oil! Now, on to today's post...

My boyfriend and I are both big fans of Homeroom in Oakland -- it's a restaurant focused on mac and cheese, and you really can't go wrong with that!  I was super excited to see that they just put out a cookbook, and was able to pick up a copy at the library.  Honestly, I was glad to take a look at it from the library, because this is one of those cookbooks that's one basic recipe with lots of variations -- every mac and cheese recipe pretty much uses the same base, with different cheeses and other add-ins stirred in.  That totally makes sense since that's how they do things at the restaurant, in their extremely tiny kitchen.  But, cookbook-wise, you're not getting a huge amount of variety here.  (I should add -- there are also recipes for sides and desserts, but let's be honest -- I was really in it for the mac and cheese!)

My other pet peeve with this cookbook was offering a base recipe that makes the wrong amount!  Every recipe starts off with two cups of bechamel sauce -- but the base recipe given is for three cups of bechamel. If this were made of cheap ingredients, fine -- but I'm not throwing away a third of a sauce made from whole milk and butter.  Supposedly (i.e., the reason given), this is because it is "difficult" to whisk together two cups worth of sauce, but I'm not really sure why that would be.  I made my bechamel in a non-stick skillet and had no problems getting it to work with the correct amounts that will be used in the final mac and cheese, which I've listed below.

Griping aside, I will give this book points for providing recipes that really do seem to replicate what's made in the restaurant.  Sometimes I've made recipes out of restaurant cookbooks, and felt like I wasn't really getting the same dish, either because the recipe didn't scale down well to a home kitchen, or because the techniques were simply too time-consuming or complicated to really make at home.  Since mac and cheese is a pretty simple dish, this really did taste like what you get at the restaurant -- a fairly mild, ultra creamy mac and cheese that's pretty much total comfort food.  Next time, I'll probably take the option of baking the mac and cheese with crispy panko on top, because I think that would make it even better.  Sadly I can't re-create the atmosphere at Homeroom in my living room (think big wooden tables, drinks in Mason jars, and uber-hipster waiters), so I'll probably be going back for the real thing sometime soon! 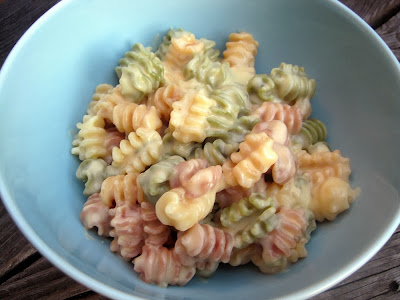 1. Put on a big pot of water to boil.  When the water boils, add some salt along with the dried pasta, and cook until the pasta is almost tender -- a minute or so less than the package recommends.  Drain, rinse in cold water, and keep ready until the cheese sauce is done.  (You can cook the pasta while you prepare the sauce to save time!)
2. In a medium pot, heat the milk over medium heat until it just starts to bubble - not a full boil. Remove from the heat.
3. Meanwhile, heat a large, non-stick skillet over medium heat.  Melt the butter in the skillet, and then add the flour and whisk constantly until the mixture turns light brown, about 3 minutes.  Remove from the heat.
4. Slowly whisk in the hot milk - it's okay if the mixture seems thick and lumpy at first...it will all smooth out as you go.  Make sure to use a silicone-coated whisk to protect your pan!
5. Put the skillet back over medium high heat, continuing to whisk constantly.  The sauce is ready when it's silky, thick, and coats a spoon -- mine was ready almost immediately, but it might take up to 2-3 minutes.  Whisk in the salt.
6. Add both the Cheddar and the Pecorino Romano cheese to the sauce, whisking to combine.  Cook until the cheese is barely melted, about 3 minutes, whisking often.
7. Add the cooked pasta, stir to combine, and continue to cook, stirring with a rubber spatula.  The pasta is ready when it's hot and steaming - about 3-5 minutes.
8. Eat right away - this pasta is best steaming hot.  Leftovers don't do well in the microwave - instead, try heating them up on the stove over medium-low heat with some extra milk, stirring the whole time. 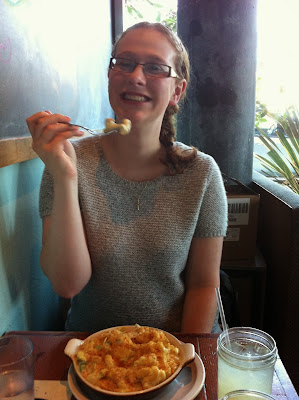 Here I am enjoying the 'real deal' at Homeroom last year.  Yum!
Posted by Sara at 8:42 AM