This holiday dessert has got to be my new favorite version of pumpkin pie.  I made it for a big Thanksgiving celebration that Tim and I went to with friends of ours, and it was a big hit.  Since we were going to a big gathering (20+ people), I doubled the recipe and made two tarts - it really isn't any harder than making one, so I recommend this if you're serving a big group.  And, you'll want extra because this tart is insanely good! The pumpkin layer is like a cheesecake, full of delicious pumpkin spices and a little cream cheese tang.  On top goes a slightly salty bourbon caramel that I might have eaten by the spoonful if I hadn't needed it for the tart!  The bourbon flavor is pretty subtle despite the fact that you add a lot -- it just adds that little extra kick to the otherwise rich and buttery caramel.  I may make this component again just to serve over ice cream - it was so good!  My family has a tradition of serving cheesecake on New Year's Eve, so this recipe is definitely coming back for an encore in about a month... 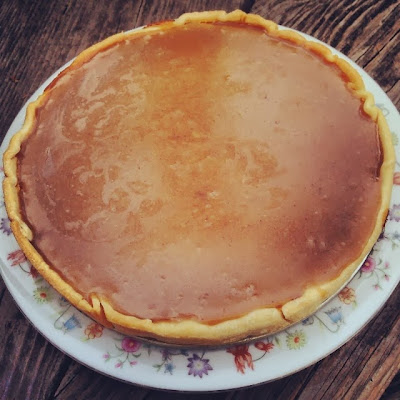 1. Fit the pie dough into two pans -- pie plates work well, or you can use a 9-inch springform pan for straight sides.  I used one of each.  Pre-bake the crusts according to the directions on your package of pie dough.  Of course, you can use any pie crust recipe you prefer -- just follow the directions to blind bake two crusts.  Leave the oven on, reducing heat to 350 degrees.  Cool the crusts on a wire rack.
2. Make the caramel while the crusts bake.  Heat a large non-stick skillet over medium heat.  Add the brown sugar, butter, and salt.  Stir until the sugar is completely melted and starts to darken, 6-7 minutes.  Whisk in the cream with a silicone whisk a bit at a time and bring to a simmer.  Whisk until the caramel is very thick, 10-12 minutes.  Whisk in the bourbon, and simmer 1-2 minutes.
3. Brush a thin layer of caramel over the bottom of each crust, and then pop the crusts in the fridge to help the caramel set.  Set the remaining caramel aside (off the heat) while you prepare the filling.
4. Make the filling.  Beat together the cream cheese and brown sugar on medium speed until light and fluffy, about a minute.  Add the eggs and egg yolks, beating until well combined.  Add the pumpkin, spices, and salt, and beat until everything is well combined.  Reduce the mixer speed to low and mix in the half-and-half.
5. Divide the filling between the two pie crusts.  Bake until the filling has puffed and the surface no longer appears wet, 35-40 minutes.  Cool on a wire rack until the filling is completely cooled, about one hour.
6. Reheat the caramel over low heat until it is pourable.  Divide between the two pies, tilting to spread it in an even layer.
7. Cover with plastic wrap and chill at least 4 hours, until the caramel is firm. 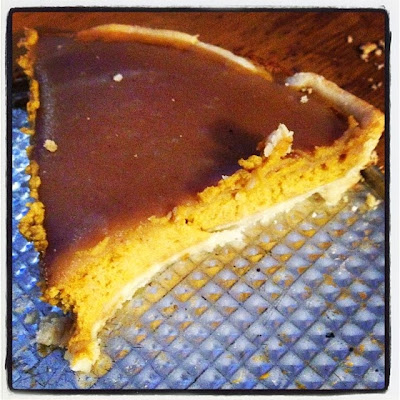