My partner for this month's Secret Recipe Club was Leslie of La Cocina de Leslie.  Leslie's blog is full of Mexican recipes that look absolutely amazing -- I wanted to try everything! I decided on her arroz con leche, or rice pudding, because I have a bit of a history with rice pudding.  I really like it, but the one time I tried to make it (years ago), it was a total fail. I'm not sure if it was a bad recipe or just user error, but it just turned out weird and unappetizing.  I think my roommates and I each took just a couple of bites before tossing it.  Leslie's recipe looked super tempting, so I wanted to give this dish another shot!  I'm glad I did, because Leslie's arroz con leche is amazing--it's super creamy and sweet with just the right amount of spicy cinnamon. Everything rice pudding should be...I'm in love! 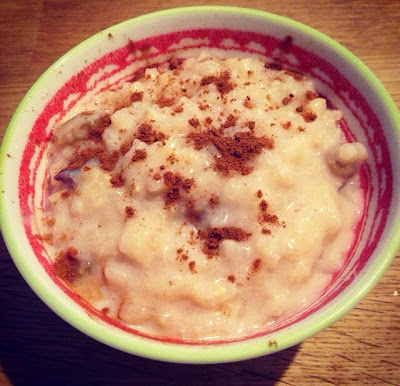 1. In a large saucepan, bring the rice, cinnamon stick or ground cinnamon, salt, and water to a boil over medium high heat.  Cover and reduce to a simmer.  Let simmer until the rice is cooked, about 15 minutes.
2.  Add the milk and raisins, and fish out the cinnamon stick and discard.  Cover and cook until the milk starts to bubble, stirring occasionally.  The stir in the sugar and simmer, uncovered, for another 10-15 minutes.  Remove from heat, cover, and let sit for at least 15 minutes.  Serve warm, or chill for at least 2 hours to serve cold.  Sprinkle with ground cinnamon before serving.