The final installment of Mexican week is coming a little late due to some unexpected illness, but I'm feeling much better and back to cooking up a storm!  These huevos rancheros come from a show I've gotten pretty addicted to, The Kitchen on Food Network.  It's over the top but a lot of fun!  This recipe comes from Sunny Anderson, and it is really delicious.  Spicy chorizo and refried beans are combined in a skillet and then spread on warm tortillas.  They make a great base for lots of flavorful toppings - sunny-side-up eggs, spicy ranchero sauce, melt-y Chihuahua cheese, super-creamy Mexican crema and diced avocado, herbaceous cilantro, and finally a squeeze of lime for pop.  You can add more or less of the ranchero sauce depending on how sauce-y you like your huevos rancheros.  Either way, I was definitely transported back to California, at least for one meal! Now, if only that darn snow would melt... 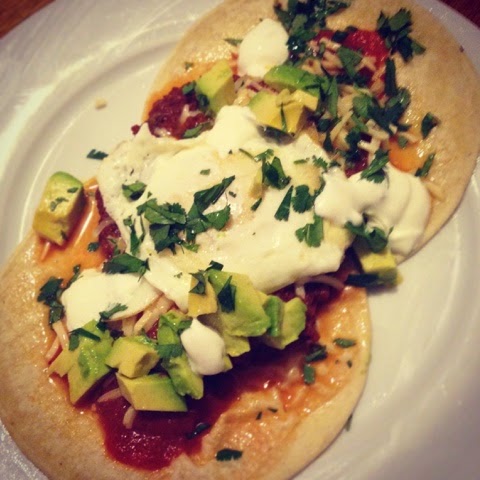 1. Melt the butter in a large nonstick skillet, over low heat.  Swirl the pan to coat the bottom and sides with butter.  Carefully crack the eggs into the pan, and cook on medium low until the whites are cooked through and the yolks are runny, 8-10 minutes.  If you'd like 2 eggs per person, double and make the extras in a second skillet.
2. In a Dutch oven or large skillet, add the oil and chorizo and cook on medium heat, using a wooden spoon to break up the chorizo into crumbles (you can skip the oil if your pan is nonstick).  When the fat has rendered, ad the onions, a pinch of salt, the cumin, and the garlic.  Cook, stirring often, until the onions are soft.  Add the refried beans, along with a splash of water if things look dry.
3. Heat the tortillas either in a cast iron skillet, over a gas flame, or in the microwave.  Reheat the ranchero sauce
4. Place one or two tortillas on each plate, depending on your appetite. You can use them as the base of the dish, or roll them up on the side for dipping.  Top with the chorizo-bean mixture, and scoop on some ranchero sauce (or subtitute store bought salsa).  Sprinkle generously with shredded cheese and diced avocado.  Then slide on the sunny-side-up egg.  Finally, give everything a drizzle of crema, a sprinkle of cilantro, and a squeeze of lime juice.  Eat while hot!


Full Disclosure: V&V Supremo sent me complimentary cheese and chorizo to sample; all opinions and recipe testing are my own.
Posted by Sara at 4:03 PM