I recently got an excellent new cookbook called Cupcakes! by Elinor Klivans. Every cupcake I've made out of it so far has been really delicious--I highly recommend it! These particular ones are hummingbird cakes, a southern recipe that combines banana, pecans, and pineapple. I used the recipe from the cookbook and did up my own frosting--a butterscotch cream cheese. It didn't turn out quite as good as I wanted, so I won't list the recipe here, but I think these would be good topped with your favorite cream cheese frosting. 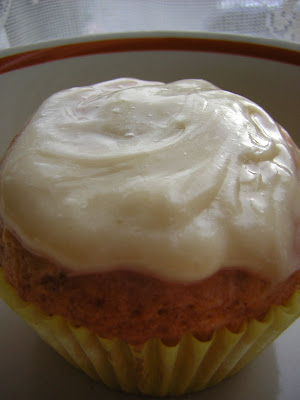 Sift together dry ingredients and set aside. In a large bowl, beat together egg and yolk with sugar until thickened and lightened to a cream color, 2 minutes. On low speed, add the oil and vanilla until blended. Mix in the sour cream until no white streaks remain. Mix in the flour mixture until it is incorporated and the batter is smooth.

Mix together the cinnamon, banana, pineapple, and pecans. Mix them into the batter just to blend. Fill each cupcake liner with about 1/3 c of batter. Bake until the tops are golden and a toothpick comes out clean, 25 minutes. Cool on a wire rack and then frost with cream cheese frosting. 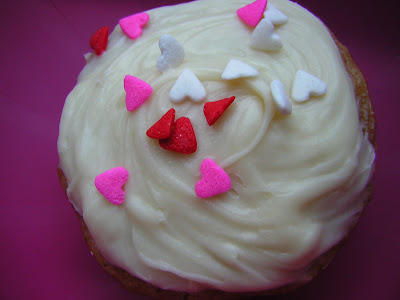