These amazing raspberry cupcakes are also from Cupcakes!, and I think they're in my top ten ever. I made them for a cupcake and wine party that one of my friends ingeniously thought up and they were definitely a hit, even among all the chocolate! They're light and the raspberry flavor comes through perfectly. The bit of almond extract isn't really detectable right after they're baked, but it gets stronger the longer they sit around (if you can manage to do that!) The frosting is pretty intense, and makes more than you'll need, so I actually remade the cake recipe the next day and baked it in a rectangular cake pan...luckily it also works well this way, and my housemates didn't have to be too upset about me taking away all those cupcakes! 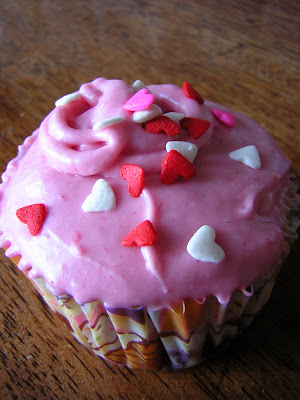 1. Preheat the oven to 350 degrees.
2. Sift together flour, baking powder, and salt. Set aside.
3. In a large bowl, beat the egg whites with the cream of tartar on low speed until the whites are foamy and the cream of tartar dissolves. Then beat on medium high until the whites for soft peaks.
4. Rinse off the mixer. In another large bowl, beat butter and sugar until smoothly blended and light in color, 2 minutes. On low speed, add flour mixture in 3 additions, alternating with milk in 2 additions. Use a rubber spatula to fold one third of the whites into the batter. Then gently fold in the remaining whites until no streaks of egg remain. Gently fold in raspberries. Fill the cupcake liners 3/4 full and then bake until the tops are golden and a toothpick comes out clean, 30 minutes.
5. Make the frosting. Process the raspberries in a food processor until smooth. Strain through a fine strainer, discarding seeds and pulp.
6. Use an electric mixer to beat together butter and cream cheese. Beat in the raspberry puree. On low speed, beat in the powdered sugar (you may need more or less depending on how thick you want your frosting). Then turn the blender to high speed for a minute or two to aerate the frosting. When the cupcakes are cool, frost and serve! 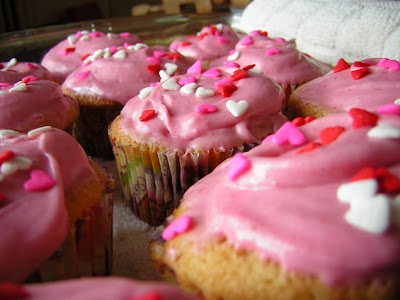