Farro-Chickpea Salad with Asparagus and Feta

Kevin of Closet Cooking has this amazing recipe for a farro salad. I had never had farro before, and I had to hunt it down in the grocery store. But it was really yummy! It goes very well with the dressing, and all the veggies complement the salad perfectly. Yum! An easy and delicious dinner, and very filling. 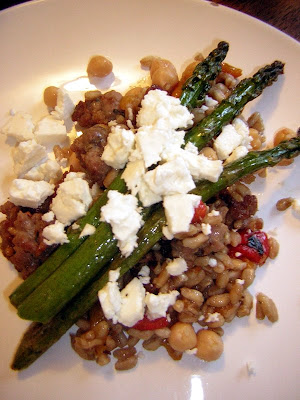 1. Bring a pot of water to a boil. Add farro and a pinch of salt, cover, and reduce to a simmer. Simmer farro until it's as tender as you'd like. Drain, then return to hot pot, cover and let sit until the rest of the dish is finished. Before serving, fluff the farro with a fork in the pot.

2. Roast the asparagus. Toss asparagus in a large baking pan with olive oil, salt, and pepper. Roast at 425 degrees for about 10 minutes, until browned and caramelized.

3. While the asparagus is roasting, brown the sausage in a large skillet, using the spatula to break it up into small chunks. When the sausage is fully cooked, set aside on paper towels to drain.

4. When all of the components are ready, combine the cooked farro, sausage, red peppers, and chickpeas in a large bowl. Whisk together the vinegar, oil, and oregano. Season to taste with pepper (don't add salt to the dressing as the asparagus and feta make the dish pretty salty--just add more later if it's not salty enough for you). Pour the dressing over the farro and toss to combine.


I'm sending this post to the Grain Blog Hop at Katherine Martinelli.
Posted by Sara at 4:43 PM