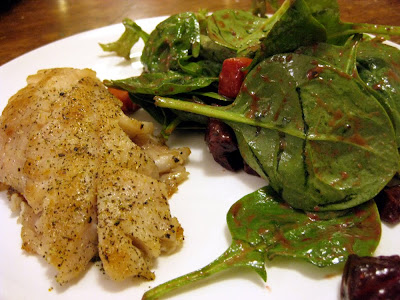 Instead of the usual five-spice powder, this recipe has you make your own "five spice powder" with orange zest, lime zest, vanilla, licorice root, and mint. Even our fancy pants grocery didn't have licorice root, so I substituted fennel to excellent effect. The recipe below does make more than you'll need for the fish, but it's also the fussiest part of the recipe so it's nice to make a big batch and have some leftover. This is a flavorful spice mix that would be good over more fish, chicken, or whisked into a homemade vinaigrette to add an extra pop of flavor.

After the spice mix is made, the rest of the fish recipe is a breeze - just sprinkle on salt, pepper, and sugar and pan fry the fish until cooked through. The spice mixture is added after cooking, presumably because the zest would be liable to burn. The result is a mild, delicate, delicious piece of fish. Make sure to ask your fish monger what he recommends - mine suggested a somewhat pricier cod than the cheapest option but it was definitely worth it!

The beet salad is a perfect accompaniment to the fish, with the dressing adding a needed acidity to the dish. I love roasted beets, although I don't make them nearly enough. The bright colors are so much fun, and the main work here is chopping the beets. After that task, the beets just roast in the oven and are tossed with baby spinach and a dressing dolled up with more of the five-spice powder. Definitely try this recipe - it's a winner! It would be elegant enough for a dinner party, but it's easy enough that you can also make it in a couple of hours in the evening, some of that being cooking time (less if the spice powder is already made). 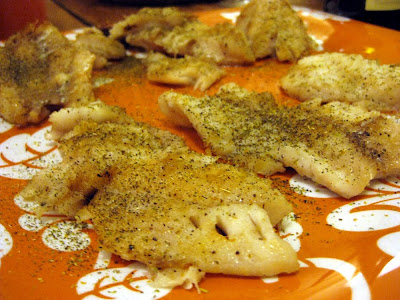 1. First, make the five-spice powder. Preheat the oven to 200 degrees. Sprinkle the orange zest, lime zest, and vanilla pieces onto a tin foil-lined baking sheet and bake about 18 minutes, until the zest is dry and starting to crisp. Stir occasionally while baking. Add the fennel seeds and mint leaves, and grind into a powder in a spice grinder or clean coffee grinder. Set aside.

2. Prepare the beets. Preheat the oven to 375 degrees. Wash and peel the beets, and cut into small cubes. Toss with olive oil, salt, and pepper and spread out on a large, foil-lined baking sheet. Roast until tender, 45 minutes to 1 hour.

4. To the oil in the bowl, whisk in fig balsamic vinegar, Dijon mustard, and additional oil as needed to create a smooth, emulsified dressing. Add salt, pepper, and a generous sprinkle of the five-spice powder. Set aside until the fish is ready.

6. Heat olive oil in two large non-stick skillets until hot. With the flame turned to high, add the fish. Cook four minutes per side, or until browned on the outside and opaque in the middle. Remove fish to a platter and sprinkle generously with five-spice powder.

7. Add the spinach and roasted beets to the salad bowl with dressing and toss to combine. 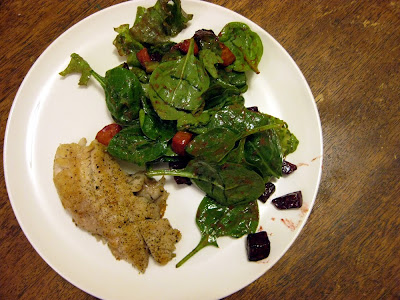