I made these cupcakes for a happy hour my housemate was putting on for our department, and they were a huge hit! The key to these is the small size: definitely go for mini-cupcakes here because these are pretty intense. The cupcakes themselves are a foolproof vanilla cupcake recipe that I've made many times. It always turns out perfectly moist and delicious, so it's a great palette for other flavors.

The maple frosting is fairly sweet (since the flavoring is another type of sugar), so you only need a little to give these the needed maple kick. Adjust the amounts of powdered sugar and maple syrup to get a flavor you like. The addition of chopped bacon on top of the cupcakes really takes them over the top. The salty flavor contrasts perfectly with the sweetness of the other elements, making this an absolutely perfect bite! My friend Jackie said these were just like breakfast in a cupcake! Yum. 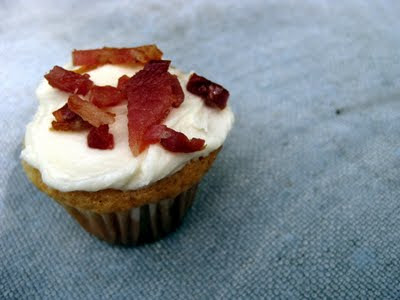 Cool cupcakes thoroughly on a rack, and then spread each cupcake with maple buttercream. It's sweet and intense, so don't overdo it!

Chop the (cooled) bacon into small pieces, and sprinkle lightly over the frosted cupcakes. You should either assemble the cupcakes just before eating or store them in the refrigerator since they contain meat. 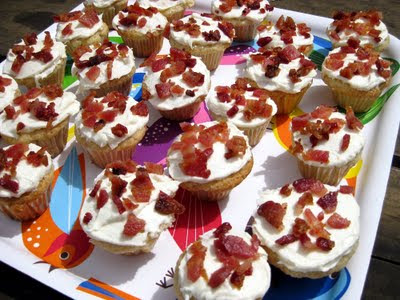 Cream butter in a stand mixer using the paddle attachment until softened. Add 1 T maple syrup and 2 cups powdered sugar, and blend until light and fluffy. Check the texture: if the frosting is too soft, add more powdered sugar until it is stiff enough to spread on cupcakes and not lose its shape. Taste the frosting: if you're not getting enough maple flavor, add more maple syrup until you're satisfied.

Preheat the oven to 400 degrees. Line a baking sheet with tin foil and place a rack on top (I used a cookie cooling rack). Lay the slices of bacon on the rack, not overlapping. Use a pastry brush to coat the top side of each piece of bacon with maple syrup.

Bake the bacon in the oven for about 10 minutes. Remove from the oven, flip the bacon over with a pair of tongs, and then coat the other side of the bacon with more maple syrup. Return to the oven and bake until fully cooked through. 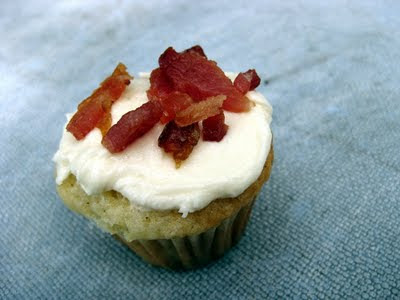