These pork skewers are easy to make and absolutely delicious. They were another of the appetizers housemate Kristi and I made for our birthday party. Again, they're a good choice for a big party because they're quick to pull together and fairly inexpensive to make. We got the pork for around $8, and the rest of the ingredients were also on the cheaper side (especially since we already had all the spices). The sauce sounds simple but is totally amazing, and the perfect complement to the pork and pepper. Everything has a mild spice, but not too much that your average party guest would be turned off. This is one of those dishes that you could definitely play around with to suit your taste and the ingredients you have on hand - different spices would be yummy here, as would replacing the red bell pepper with a different color or even zucchini chunks. 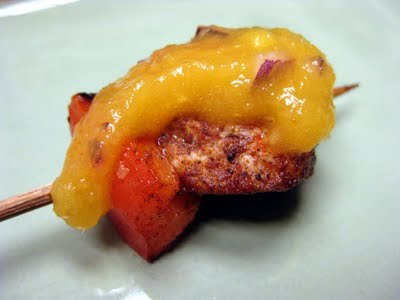 This dish is also very easy to make ahead. Simply assemble the skewers, cover with plastic wrap, and chill in the fridge until you're ready to roast them. We prepared both the pork skewers and the prosciutto-gruyere turnovers ahead for our party, and then alternated popping trays of the two in the oven so that there was always a hot batch of something tasty coming out over the course of the party. (Luckily we have about a million baking sheets!)

The flavors here were so tasty that I could definitely see making this again, not only as an appetizer but also tweaked as a main dish. Roasted pork loin would be fantastic with the mango sauce, perhaps with the bell pepper incorporated into some sort of side dish.

1. Preheat the oven to 450 degrees.
2. Place the mango, pineapple juice, lime juice, and 1/4 tsp salt in a blender and process until almost smooth. Pour into a bowl and stir in the red onion and jalepeno. Refrigerate until chilled.
3. Toss the pork, bell pepper, and oil in a medium bowl. Mix the paprika, onion powder, cinnamon, allspice, and remaining 1 tsp salt in a small bowl. Toss the pork and bell pepper with the spice mixture until well combined.
4. Slice one piece of red pepper, skin side first, onto each skewer, followed by one piece of pork. Place the skewers on a foil-lined baking sheet and bake until the meat is barely cooked in the center, 10-15 minutes. Serve with the mango sauce. 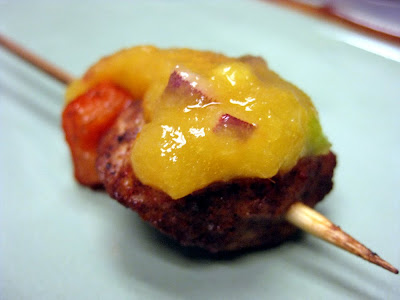 I'm sending this recipe off to BSI: Mango and Happy Hour Friday.
Posted by Sara at 2:39 PM