I made these cupcakes for my friend Jessie's birthday. She requested pina colada cupcakes, and on that count these weren't entirely a success. I thought using a hummingbird cupcake recipe but subbing coconut for the pecans would work well - after all, the cupcakes are made with pineapple and banana! Unfortunately, the flavors just didn't come through as "pina colada" as much as I wanted.   However, the cupcakes were super tasty and enjoyed by all (at a tiki bar!), so these were at least a partial success!  The toasted coconut on top added a festive touch making these perfect for a birthday.  While they weren't quite pina colada, I would definitely recommend these cupcakes as a coconut-y twist on hummingbird cakes.  And next time I want pina colada, I think I'll try a coconut cupcake and top it with some sort of pineapple frosting. 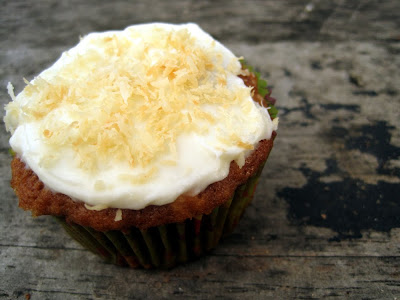 Unsweetened coconut, toasted in a 350 degree oven until golden brown

1. Preheat the oven to 350 degrees F. Line cupcake pans with paper liners.
2. Mix together the sweetened coconut, bananas, pineapple and 1/2 cup flour in a small bowl.
3. Whisk the remaining 2 1/4 cups flour, ginger, baking soda and salt in a bowl. Beat the eggs and granulated sugar in a separate bowl with a mixer on high speed until thick and light, 5 minutes. Gradually beat in the vegetable oil.
4. Sprinkle the flour mixture over the egg mixture, then gently fold to make a thick batter. Fold in the coconut-fruit mixture, then transfer the batter to the prepared pans. Bake until a tester comes out clean.  Cool the cupcakes, then frost, and sprinkle with toasted unsweetened coconut. 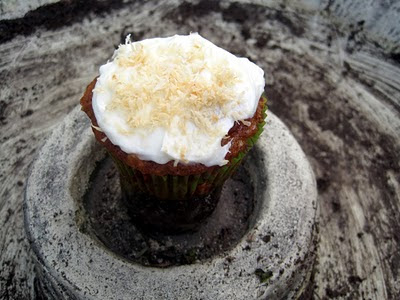 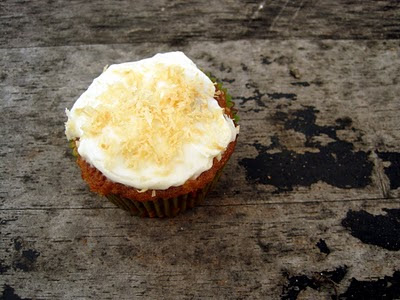