I'm a bit late with this month's Daring Bakers recipe, but better late than never, right?  This dessert was definitely worth waiting for.  The April 2010 Daring Bakers’ challenge was hosted by Esther of The Lilac Kitchen. She challenged everyone to make a traditional British pudding using, if possible, a very traditional British ingredient: suet.  I didn't manage to find suet, but I did steam my first ever pudding!

I decided on a rhubarb pudding since it's getting to be that season and rhubarb is one of my favorite ever ingredients.  The recipe itself was very easy - soften rhubarb on the stove with sugar and ginger, and then top with a sweet cake batter.  The steaming was new to me.  I ended up using a ceramic dish I dug up from our pots and pans shelf, and set it in a big dutch oven with a canning rack in the bottom.  This worked beautifully, even when the rubber band subbing in for string broke from the heat!  (I guess in retrospect that was not such a great idea!)  Even so, the parchment didn't seem to leak and the pudding was perfectly fluffy and delicious - not at all soggy as I was a little worried it would be.  The tart rhubarb made a nice contrast with the sweet cake, and overall this was a super tasty dessert that I'll definitely make again in some form or another.  It's certainly not the most beautiful dessert ever, but it makes up for that in tastiness! 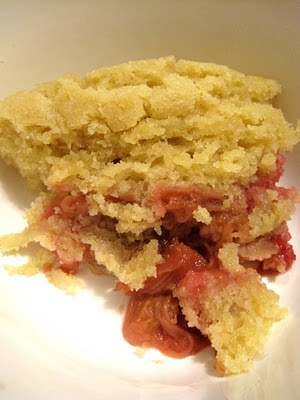 Steamed Rhubarb Pudding (adapted from BBC Good Food)
Serves 6
Note: In true British style for this challenge, I used a British recipe with weights rather than volume measures.  Time to pull out that scale!  Sorry - I don't have conversions.

1.  Combine the rhubarb with 75 g of the sugar and the ginger in a pan over a gentle heat for several minutes until softened, stirring occasionally. Remove from heat.
2. Grease a 900 ml pudding basin.
3. Put butter, shortening, and remaining sugar in a bowl and cream together. Stir in vanilla extract, then beat in eggs, a little at a time. Stir the flour into the mixture.
4. Spray your pudding basin with oil.  Spoon rhubarb into the bottom of the basin, then spoon the sponge mixture on top and level off surface.
5. Cover the pudding basin with a layer of parchment and then a layer of foil.  Secure with a string.  Steam over simmering water for about 1-1/2 hours, covered, checking regularly that the pan does not boil dry. Let cool about 10 minutes, and then spoon out into bowls and enjoy!
Posted by Sara at 10:19 PM