I am in love with this recipe because it is seriously easy to make, but definitely fancy enough to serve to guests -- we served it to my parents-in-law when they were visiting and it was a big hit.  The only time-consuming part is trimming and slicing the Brussels sprouts -- as you can see in the photo, I did more halves, and they were a little too crunchy -- I would definitely slice thinner next time.  You could also go with something like haricots verts as a quicker option, too.  The sprouts get spread out on a sheet pan, topped with a wire rack, and then steaks go on the top layer.  This means the sprouts get extra flavor from the steak drippings - yum!  Everything goes under the broiler for just a few minutes, and then the steak is topped with a super fast, 4-ingredient blue cheese sauce.  The sauce is pretty mild because the blue cheese is cut with sour cream, so even blue cheese skeptics may enjoy it.  Bonus: this meal is gluten free, if that's something you need (we served it with gluten free cornbread). 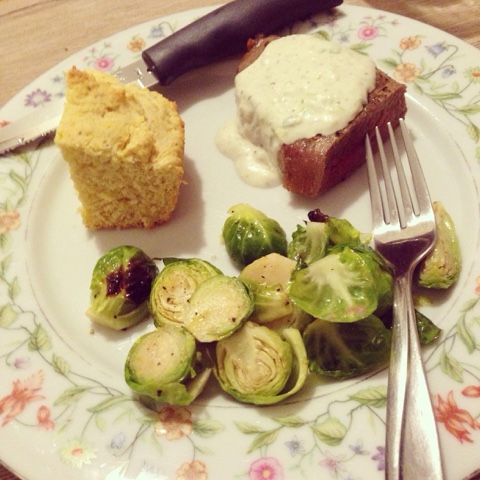 1. Position a rack about 6 inches from the broiler and preheat the broiler to high.
2. Line a large rimmed baking sheet with foil and spray with oil.
3. Toss the Brussels sprouts with a generous pour of oil and season with salt and pepper.  Arrange in a single layer on the baking sheet.  Cover with one or two wire racks set on top of the Brussels sprouts.
4. Brush the steaks with oil, and season both sides with salt and pepper.  Place on the rack.
5. Broil, flipping once, until the sprouts are a little charred and the steak is cooked to your liking, about 3-5 minutes per side for medium rare.
6. Meanwhile, puree the sour cream, blue cheese, vinegar, and scallion in a mini chopper or blender.  Season with salt and pepper.  Transfer to a small bowl and set aside.
7. Cover the steak and sprouts with a large piece of foil, and let rest about 10 minutes.  Then serve, along with the blue cheese sauce.
Posted by Sara at 4:15 PM