The Daring Bakers Challenge this month was Lemon Meringue Pie. Now, I love love love lemon meringue pie, but the last one I made was more like Lemon Meringue Soup! So I was a little nervous, especially since my mom and I were making it to take to a dinner with our neighbors...and we were starting a little late so it wasn't going to have time to totally cool before we left!

We first started on the crust, and while the dough was delicious and rolled out nicely we were a little concerned with how much butter was in it compared to other crust recipes...and whether due to the amount of butter or due to us not chilling the crust long enough before baking it, it turned out a disaster in the oven! It's meeeeeeeeelllllltting!!! 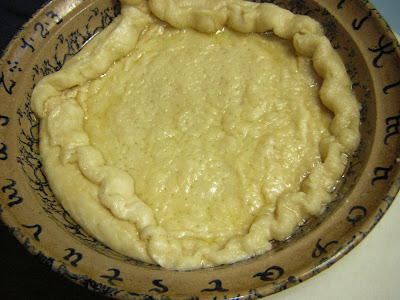 We did finish baking it though, and let me tell you, that crust was delicious--like eating shortbread cookies! For the pie though, it was much too...abstract art-y? Since it was the last minute, we had to sub in a less-tasty but more-structurally sound crust dough we had in the fridge...oops! But, I tried! 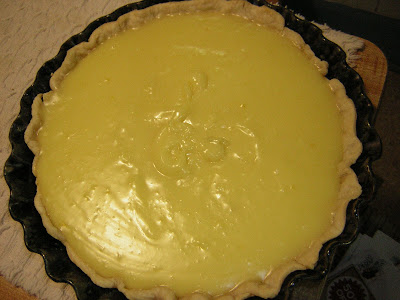 After the crust, the rest of the pie worked perfectly! The lemon curd was nice and thick when I poured it into the pie shell. Although it acquired some lumps at first, they mostly seemed to disappear once the butter was added, and weren't noticeable in eating the pie at all. The meringue whipped up beautifully... 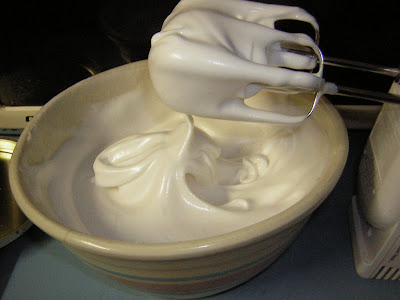 ...and I tried something other than little peaks and mountains on top of the pie, which I think worked out well and looked really nice. 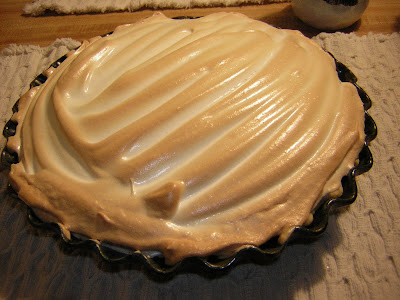 When it was time to eat, everyone agreed that the pie was simply delicious! Just the right amount of tart and sweet, and a perfect meringue. It was a little warm on the bottom due to us not cooling it enough, but that was my fault, not the recipe. :) It was still extra tasty! Be sure to check out everyone else's pies this month! The Daring Baker's Blogroll is linked to over on my blogroll to the right of the blog.

To Make the Crust:
Make sure all ingredients are as cold as possible. Using a food processor or pastry cutter and a large bowl, combine the butter, flour, sugar and salt.Process or cut in until the mixture resembles coarse meal and begins to clump together. Sprinkle with water, let rest 30 seconds and then either process very briefly or cut in with about 15 strokes of the pastry cutter, just until the dough begins to stick together and come away from the sides of the bowl. Turn onto a lightly floured work surface and press together to form a disk. Wrap in plastic and chill for at least 20 minutes.

Allow the dough to warm slightly to room temperature if it is too hard to roll. On a lightly floured board (or countertop) roll the disk to a thickness of 1/8 inch (.3 cm). Cut a circle about 2 inches (5 cm) larger than the pie plate and transfer the pastry into the plate by folding it in half or by rolling it onto the rolling pin. Turn the pastry under, leaving an edge that hangs over the plate about 1/2 inch (1.2 cm). Flute decoratively. Chill for 30 minutes.

Preheat oven to 350ºF (180ºC). Line the crust with foil and fill with metal pie weights or dried beans. Bake for 20 to 25 minutes. Carefully remove the foil and continue baking for 10 to 15 minutes, until golden. Cool completely before filling.

To Make the Filling:
Bring the water to a boil in a large, heavy saucepan. Remove from the heat and let rest 5 minutes. Whisk the sugar and cornstarch together. Add the mixture gradually to the hot water, whisking until completely incorporated. Return to the heat and cook over medium heat, whisking constantly until the mixture comes to a boil. The mixture will be very thick. Add about 1 cup (240 mL) of the hot mixture to the beaten egg yolks, whisking until smooth. Whisking vigorously, add the warmed yolks to the pot and continue cooking, stirring constantly, until mixture comes to a boil. Remove from the heat and stir in butter until incorporated. Add the lemon juice, zest and vanilla, stirring until combined. Pour into the prepared crust. Cover with plastic wrap to prevent a skin from forming on the surface, and cool to room temperature.

To Make the Meringue:
Preheat the oven to 375ºF (190ºC). Using an electric mixer beat the egg whites with the cream of tartar, salt and vanilla extract until soft peaks form. Add the sugar gradually, beating until it forms stiff, glossy peaks. Pile onto the cooled pie, bringing the meringue all the way over to the edge of the crust to seal it completely. Bake for 15 to 20 minutes, or until golden. Cool on a rack. Serve within 6 hours to avoid a soggy crust.
Posted by Sara at 11:58 AM