We had a delightful wine/cheese/cocktail party over the weekend that was lots of fun. We had 10 kinds of cheese from Cheeseboard, an amazing local cheese co-op. Here's a look at the spread of goodies we had: Mocha Meringue Cupcakes (in honor of this month's Cupcake Hero), gougeres, and prosciutto-and-basil wrapped mozzarella and gruyere (a recipe of my housemate Jessie's). 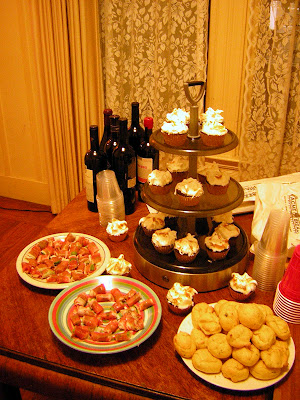 All were delicious, as was the spread of cheese. More on the cupcakes and gougeres in a later post... 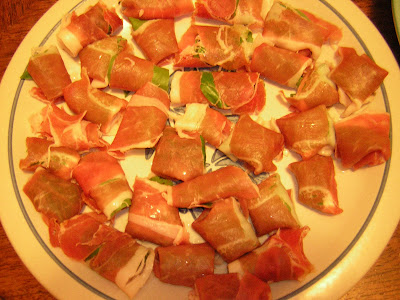 These tasty tidbits were easy to assemble--we just got a delicious ball of fresh mozzarella and cut it into little squares. We wrapped each one in a piece of prosciutto and a leaf of basil (it worked out to about a third of a slice of prosciutto per square of mozzarella). When we ran out of mozzarella, we used chunks of gruyere, which was different but also delicious. Then Jessie squeezed lemon juice over the top and yum, ready to devour! 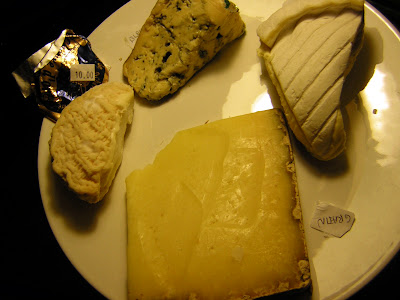 And here are some shots of some of our cheeses...one of my favories had the cutest name...it was a sheep's milk cheese called "ewephoria"! :) 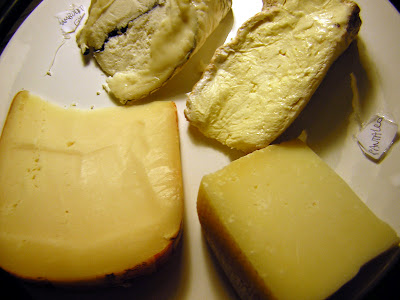