Bread pudding is a great use for day-old bread that you want to use up. In this case, I had lots of brioche crusts from cutting out circles for my venison sliders. I paired the brioche with lots of fresh raspberries and blueberries for a lovely summer bread pudding. I've made bread pudding with various recipes over the years; this one is richer than I normally go, and it ends up very moist and custardy. Yum! 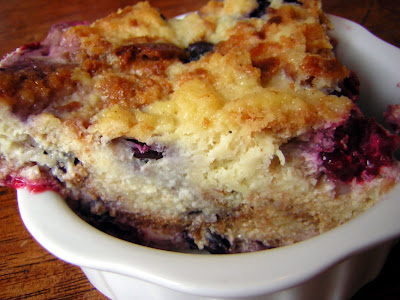 1. Cube the day-old brioche and place in a large bowl. Set aside. In another large bowl, whisk together the yolks and whole eggs with the sugar and salt until thoroughly combined. Set aside.

2. Pour the half-and-half into a medium saucepan. Cut the half vanilla bean in half lengthwise and scrape the seeds into the saucepan along with the scraped bean. Heat over medium high until steaming but not bubbling.

3. Slowly whisk the hot half-and-half into the egg mixture until thoroughly combined. Strain over the bread cubes. Press down on the bread with a wooden spoon to make sure it is as submerged in the custard as possible. Allow the custard to cool to room temperature for a couple of hours, then gently fold in the berries.

4. Preheat the oven to 325 degrees. Spray a 9x13 baking dish with oil and then pour the bread-custard-berry mixture into the baking dish. Cover loosely with foil, place the baking dish on a heavy baking sheet to catch drips, and then carefully transfer the pudding to the oven. Bake for 70 minutes, then remove the foil and bake for a further 20-40 minutes until the bread pudding is well browned and no liquid custard appears when the pudding is pierced in the middle with a knife.
Posted by Sara at 11:20 AM