When I visited my parents in Ohio earlier this summer, we were lucky enough to spot some frozen sour cherries at the grocery store. I'd been craving them for quite a while and even made some sour cherry crisp with canned sour cherries (which I'll be posting later this week), but it just wasn't the same. I don't really understand why frozen sour cherries aren't available everywhere--after all, there are plenty of non-local fruits that get frozen and shipped everywhere! And they're so delicious, I can't believe they wouldn't sell, especially in a foodie-heaven sort of place like Berkeley. Yet every time "sour" cherries get sold here, they seem to be slightly-less-sweet sweet cherries.

In any case, I was delighted to find the frozen cherries in Ohio, and the crisp did not disappoint! It had that perfect sour cherry taste I remember from when I was a kid, almost mouth-puckering cherries in a sweet sauce. These cherries need only a simple topping to complement them perfectly. If you do have access to fresh or frozen sour cherries where you live, don't let this recipe pass you by! 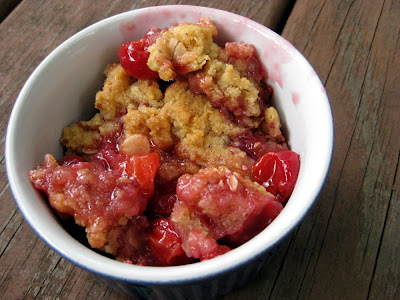 1. Preheat the oven to 375 degrees. Let cherries thaw, if frozen, and then drain. Discard the liquid or reserve for another use.
2. Whisk together the almond meal, flour, oats, baking powder, and 1/4 tsp salt. Set aside.
3. Cream together the butter, brown sugar, and 1/4 cup white sugar, either by hand or with an electric mixer. Stir in the almond mixture until everything is well mixed.
4. Prepare the cherries. Stir together the cherries, 1/2 cup white sugar, cornstarch, and a pinch of salt in a bowl. Pour into an 8x8 square baking dish.
5. Using your fingers, pinch the topping over the cherries in small pieces, covering the whole pan with the topping.
6. Baking until the filling is bubbling and the topping is browned, about 50-60 minutes. Cool slightly before serving. Vanilla soft serve is an excellent accompaniment.
Posted by Sara at 7:40 AM